Forgive this post for being a bit off topic but yesterday was a special day. We joined tens of thousands of others waiting for a bus in Portsmouth. The bus of course was that carrying Pompey's victorious FA cup team on their tour of the city. Kath and I have both lived in Portsmouth in years gone by and we both love it. I've never been with such a huge happy crowd. Even the passing ferries along the sea front were sounding their hooters. They do get amazingly close to the shore as you can see here some hours before the party began. 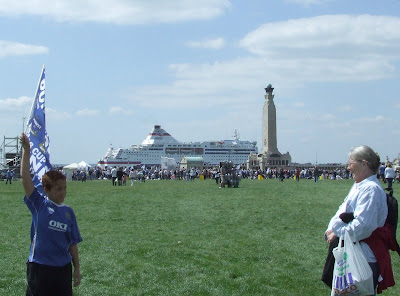 Taking photographs got more and more difficult as the crowds grew larger and denser. In the end I had to resort to holding the camera over my head and hoping for the best. I got a lot of pictures of flags! If you look hard below you can just see the famous cup being held aloft at the front of the bus. Along with looking at the picture you have to imagine a deafening wall of cheering, singing, whistle blowing, and air horn sounding. The crowds at this point were a hundred yards deep at side of the road and tens of thousands of others were waiting on the common behind us. 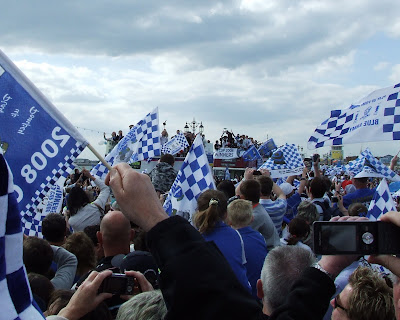 After the fuss died down we spent a quiet half hour on the beach watching the hovercraft come and go, something I never tire of seeing although they'd make a terrible mess on a canal! 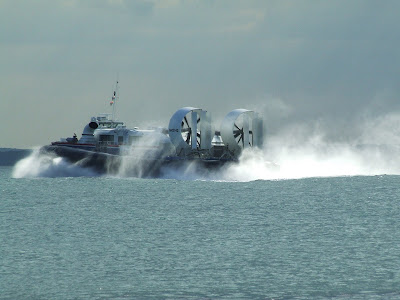 Hello, I found your blog through nb Pickles no.2

I just wanted to say that my hubby left the comfort of our boat to travel to watch the F.A. Cup Final on the common at South Sea. He woke up at 4am the following morning in a bush!