Here we are back at Camden after locking down to Limehouse in the rain yesterday and a much more pleasant run up in the weak sun today. Limehouse is great. Coming into the basin you have a real sense of arrival, even if you are soaking wet from your shoes to your neck. Kath surveys the scene over her breakfast cereal and wonders what it would be like to have a yacht here.. 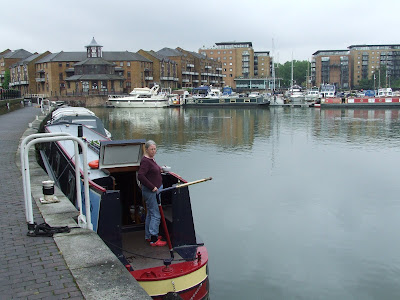 We looked in some estate agents windows and you can get a nice little studio flat (bedsit) for a quarter of a million.

Strange then that when you leave up the Limehouse cut you pass so much dereliction and signs of poverty. The lock keeper at Old Ford Lock told us that they collect three sixty ton barges of weed and rubbish from the Lee navigation every day. Never mind, the Olympics are coming and the regeneration is starting. Quite what they’re doing to this railway bridge I don’t know. It seems sheathed in secrecy! 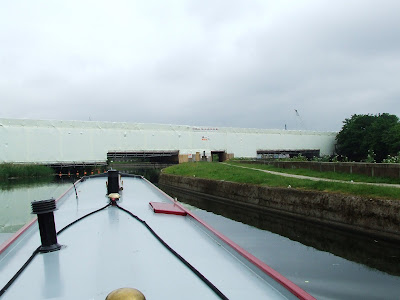 There are rumours of armed guards keeping security around the actual Olympic site. Some of the nice old stuff will remain like the wonderful tide mill buildings at Three Mills. 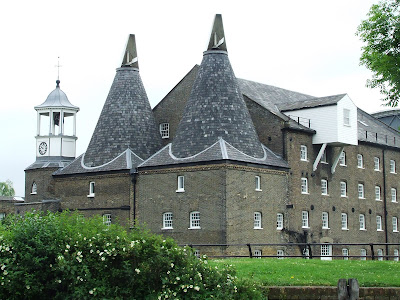 At various points on the journey you get glimpses of the Gherkin tower. Here it appears unexpectedly as we came down the Hertford Union cut by Victoria Park. 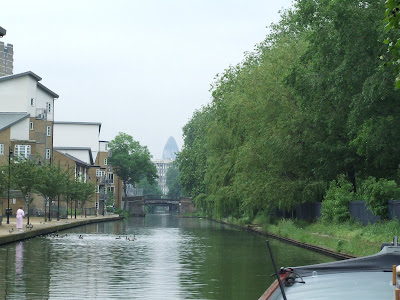 Back to Paddington tonight where I dare say we may pay a visit to the Warwick castle again.
Posted by Neil Corbett at 3:04 pm

Hope your enjoying the break. Its been wet and wild back at base but we're hoping for a flaming june for our departure next week.
great pics folks