The Thames at Warp factor 8 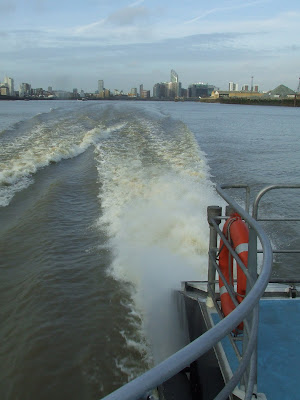 Before we took our boat ride on Will on Saturday, we had a few hours to kill, so we took another boat ride! When we've been down at Limehouse basin in the past and looking out over the Thames we've watched the high speed Clipper catamarans whizz past and I've always fancied a ride in one. These are pretty big boats, I didn't count the seats, but over a hundred I would think and they zip up and down all day between the London Eye at Waterloo and the O2 arena at Greenwich, stopping at several piers in between. A lot of commuters use them to get to Canary Wharf. 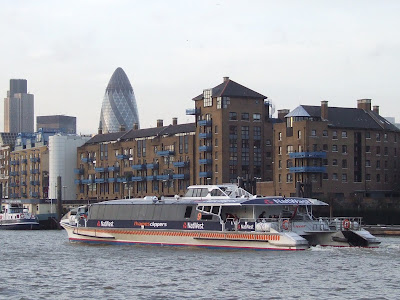 We bought a family roamer ticket which allowed us to hop on and off them all day and the first thing we did was to go all the way to the O2 arena (formerly the millennium dome). Even before we got on board I was gobsmacked by how manoeuverable they were. They approached the pier against a fast running tide and pulled in backwards and sideways to the exact spot. I reckon it must take a lot of practice.
It took about 40 minutes to get to the O2 including several stops. Kath liked it, but as we approached Limehouse reach she said, "I thought it would be faster than this". Well, at that point we must have moved into a new speed limit area because suddenly they opened up the power. Its almost impossible to believe a boat that big can accelerate that fast. The brochures say these boats do 28 knots (about 30mph) but I can tell you it feels like about twice that. Herbie does about 4 or 5 mph at 2000 revs. Not only that, the boats can stop as if they had disc brakes. You might gather that I was impressed! If I were you I'd have a ride if you go to London. Stand on the back and you'll feel the force!
We never went to the dome when it was the dome because I thought it was a naff idea for the millennium, but I was interested to pop in now to see the structure. We didn't stay long, just enough to grab a pizza. It sure is big though. This is just the entrance hall. 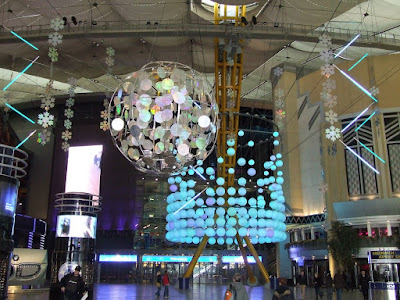 and this is the view down the Thames from the O2 pier. 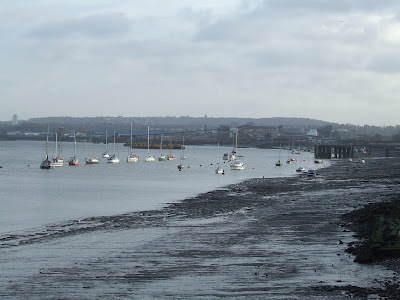 Later that day we had yet another treat which I'll tell you about next time.
Posted by Neil Corbett at 7:45 pm

This trip also looks like great fun! Funny how we boat people can never get enough of boats, can we? We nearly always end up heading for the water and the boats wherever we go too.

Ah, Glad the weather was upto the trip,

As you look down the river on your last pic, Back in the 80's to the right of the Yatchts on the trots is where we used to do our Riot training. It was an old warehouse and they used to throw wooden blocks at us to simulate bricks!!!!! happy days :)