Under Tower Bridge in a Thames Barge

No dear reader I have not abandoned you. It's just that I've been to busy to blog over the last week, what with Christmas coming up and all that. In fact I've got plenty to tell you and some good photos so stay tuned.
Yesterday was supposed to be Jacob's Christmas treat in that we took him to London for a ride on a sailing barge under Tower bridge. Well, he did enjoy it, but to be fair I think I enjoyed it most. I was like a kid in a toy shop.
I won't start at the beginning, I'll save that for later, but at the appointed time we boarded the barge "Will" and set off towards the bridge. I must say it felt a bit like brinkmanship because the bridge only just opened in time. For a minute, I thought we were going to snap the mast off. 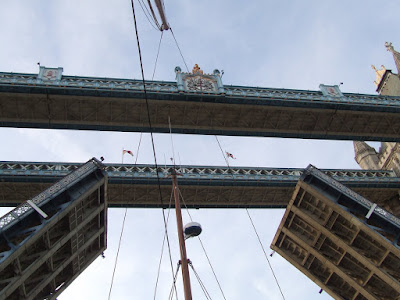 Earlier , I took pictures of Will coming back from it's previous trip. 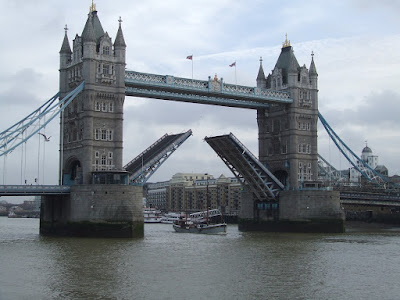 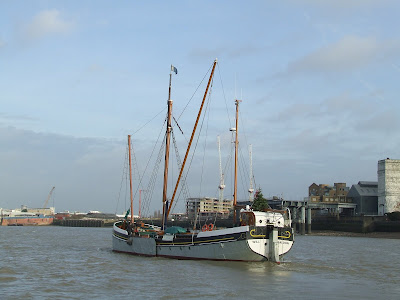 Will is a fine looking boat built in 1925 and she used to carry between London and Portland with all sorts of cargoes. Nowadays she is reduced to carrying corporate parties and the like, and they have converted her hold into an oak panelled dining room.
She does still go under sail occasionally, yesterday we were powered by the big old Gardner diesel which the skipper kindly showed me after I chatted him up. I have to say that I wouldn't want to take Herbie on that stretch in similar conditions. Even will was pitching quite a bit from the wash of the big high speed passenger boats that zoom up and down the river.
We went as far as Greenwich, by which time it was getting dark and the return trip was much better as we had the benefit of all the lights, the best sights being Canary Wharf 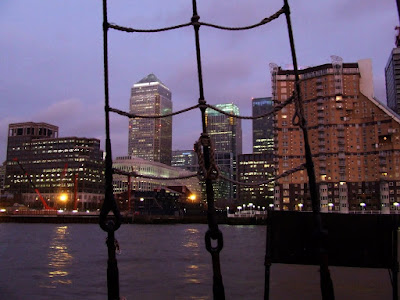 and the return under Tower Bridge. Most of my photos are a bit blurred because of long exposure times and moving boats, but I still think they are evocative, don't you? The prow of the boat was so high that Jacob wasn't tall enough to see forward properly until one of the crew took pity and let him , and us, stand up by the wheelhouse. Sometimes having a child along has benefits. 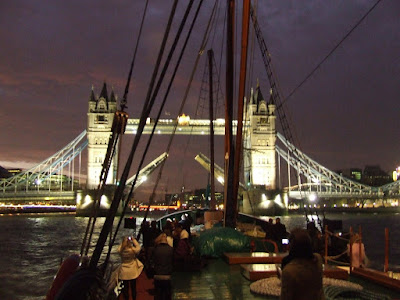 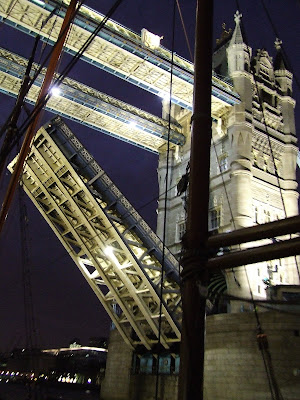 It was a great trip, but that was only one part of a great day out on the river. I'll tell you the rest over the next couple of days. Stay tuned.
Posted by Neil Corbett at 11:07 pm

What a great trip! I've never seen a Thames barge up close before, but they remind me a little of galleons with their flat sterns. I'm so used to Dutch sailing barges, which have more rounded behinds. Will is beautiful though, and the pics are, as you say, very evocative. I'll bet you were happy as..well you know all the expressions...but pigs and clover come to mind eventually.

Im sure ive got vids of Will somewhere on one of our trips on Emblem when we followed the Thames Barge Race off Gravesend.
I last saw her/him coming into Otterham Creek as we were leaving following our annual 2 weeks in dry dock, The Girlfriend of the Helmsman on that day was one of our crew on our very first trip to Oostend Voor Anker. A fine Ship