Clambering in and out of thre Anchor and Hope

A right comical pair we must have looked at lunchtime today.  Having moved up the Lee navigation past the new Olympic site we eventually reached the Anchor and Hope at Upper Clapton.  This tiny tiny little pub is a rare survivor of bygone days and worth a struggle to reach. 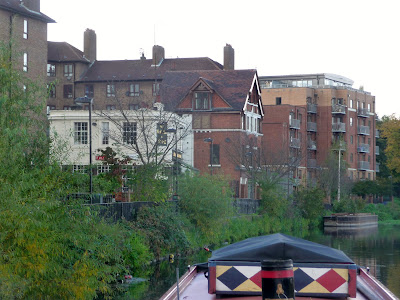 Here we are on the approach run﻿.  The pub is the white building.  We are aiming for the gap between the bushes in the centre right of the picture.  The bank is overgrown and hides a concrete wall, which is as high as the roof of the boat.  Kath nudges the boat in and I leap, rope in hand, onto the wall and tie us (the boat that is) to the railings.  The barman strolls out to welcome us.  We have to climb over the railings which are chest height.   He grabs an old cane chair, lifts it over the railings and plonks it on the narrow ledge atop the wall.  We step on the chair, swing our legs over the rails, onto a bench seat and down to the pub terrace.  Elegant it is not!
Inside the little pub we sample a particularly fine pint of Lancashire Amber Ale, low in strength but high in character.  While I sip, I read an old newspaper article on the wall.  It concerns the previous landlord who kept the pub for over 50 years and is reckoned to have pulled a million pints.  He recounts some of the famous visitors who have drunk there including Oliver Reed.  Then a tale of a woman who was dragged half drowned from the river outside the pub.  A kindly stranger gave her the kiss of life and was promptly punched in the nose by the lady's jealous husband!
Pint over and time to go.  I suggest we could get some glasses from the boat and have a carry out because the beer is so nice.  The barman just pulls us two pints and tells us to return the glasses next time we pass. So now we face the railings and the wall again only this time carrying full glasses of beer.  It was all a bit comical but we made it and were soon on our way north again. 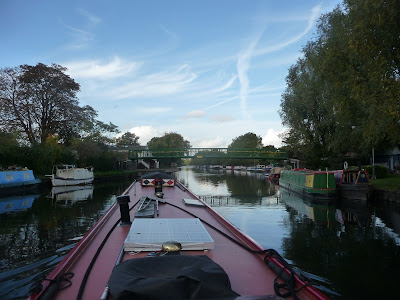 The lower Lee could never be called smart, but it has a charm of its own.  The navigation is wide and the water weedy but very clear.  The left hand side going North is mostly housing and industry while the right hand side b, beyond the Olympic site, is given to, marshes, parks, trees and high banked reservoirs.  I like it.
Tomorrow we reach the prettier, posher bits.
Posted by Neil Corbett at 8:16 pm

Welcome to the Lee.
Are you coming up as far as the Stort ??