The First Rule of DIY

The First Rule of DIY is that nothing is as simple as you think.  On Wednesday I fitted our new LED lights.  Just screwing five light fittings to the board and attaching the wires, but I came home completely exhausted.

These little lights need one ceiling hole for the back of the bulb and one for the switch.  Like this 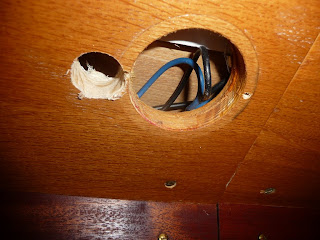 The big hole was already there, for the previous spotlights, and just the right size.  So just drill out hole number two using a paper template I made,  feed the wires through, crimp on some spade connectors,  insulate, connect up and screw on the light fitting.  Simple. 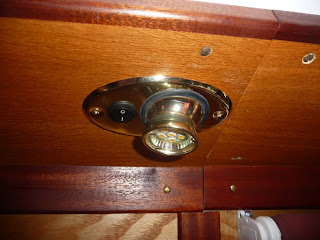 A bit tiring on the old arms, working overhead and drilling that one inch hole through a thick board, but simple.  On to the next.

Aaah.  For some unknown reason the hole for the old spotlight is only half as big, and it needs to be the full two inches.  How do I enlarge it? Saw?  Too hard.  Chisel?  Too messy.  Chain drill little holes?  Messy and take ages.    I  visit the rear deck lockers to look for tools.  Somehow the rain has got into my old toolbox and everything is sitting in water.  I empty out and clean and dry the lot.  Still no suitable tool.

Hole saws are OK but they wobble all over the place if the central pilot drill has nowhere to bite.  Wobbling I can't have because it will probably scratch the visible wood around the light.  I have an idea!  Cut out a plug using the hole saw, (luckily I bought a kit with several size holes) from some old plywood, exactly the size of the existing hole.  Plug the existing hole and then hole saw pilot  drill has somewhere to bite.  Amazingly it works.

Hole sawing a two inch hole overhead in 18mm ply is hard on the arms and neck.  I have sawdust up my sleeves and my nose. I am already knackered and the drill batteries, which I forgot to charge before hand, are wilting.  Time for lunch while we both recharge.

I try the new lights.  They don't work.  Neither do any lights on that side of the boat.  Aaah, the fuse has blown, very probably two wire ends touched before I got them plugged in.  I should have had the boat batteries off.  I put a new fuse in place, and the fuse fitting in the fuse box snaps off.  Bugger.  It's just a bit of copper strip with a hole in.  I bodge up a new one, not very good but ok for now.  The two new lights work.  Hooray! Three more to go.

Same hole size problem with the remaining three, but the drill and I just make it through before we now both collapse.  Neither of us had long enough to recharge over lunch.  Still I have to sweep up the old sawdust ( which was everywhere) and put away the amazing number of tools and drills I seem to have used.  Then I notice another old spotlight I had forgotten, just above the gas water heater.  So I hadn't bought enough lights.  I need 6 not 5.

Never mind.  I'll replace that one in the fullness of time.  The new lights do just what we want, giving a nice soft light here and there like this one in the corner.  And they only use a small fraction of the watts of the old halogens. 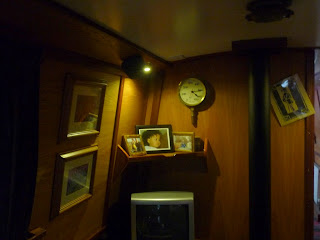 Now I think I have to fit a new fuse holder.  Ho Hum.
Posted by Neil Corbett at 9:39 am

You have my sympathy, Neil. Why does that always happen? Great write-up!

What a job! And then to find you've missed one. Great account Neil. You should write for a DIY magazine!