A one way trip on a sinking boat

1994.  We hired a boat from Anglo Welsh on what seemed to us a dream trip.  It was a one way journey from New Mills on the Upper Peak Forest canal in Derbyshire, all the way to Llangollen.  This meant taking in the Macclesfield canal, the Trent and Mersey, the Middlewich arm, the Shropshire Union and the Llangollen canals. All in all about a hundred miles and 62 locks.  We drove to the Trevor boatyard near Llangollen, where they took us on a bus to New Mills to get the boat.

On boarding our boat, Silver Cloud, we noticed a wet patch on the carpet near the rear of the saloon.  "Don't worry" said the man  " we had a bit of a leak from the central heating.  It's fixed now".  He was lying!

To get a cheap hire rate we were going at Easter and it was wet, windy and very cold.  Off we went, reaching a very wet Macclesfield on the first night.   To warm us up we got in a Chinese takeaway and then sought out a warm pub for the rest of the evening.  On returning to the boat, we went to look at the damp patch and it had not dried out, it was much wetter.  In fact there was standing water in the corner.  Further investigations showed a lot of water in the bilges, so we ran the bilge pump and it took an amazing 20 minutes before the flow from the pump stopped!  We checked again in the middle of the night and it was clear that we had a leak because the water reappeared. 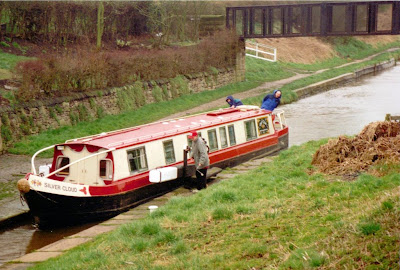 Well, to cut a long story short we opted not to call in the boatyard because we wanted to complete our journey, so all week we regularly ran the bilge pump as we were going along and a couple of times each night.  Boy, it was cold.  Sleety rain and strong winds.  Going along the Llangollen canal there were white crests on the waves.  Our hands were numb and our teeth were chattering.  Each night we sought refuge in pubs that had open fires.


Mercifully on our last day the sun shone and we were able to enjoy the spectacular crossings of the Chirk and Pontycysyllte (I spelt that without looking it up!) aqueducts.  Here we are crossing the Pontycysyllte 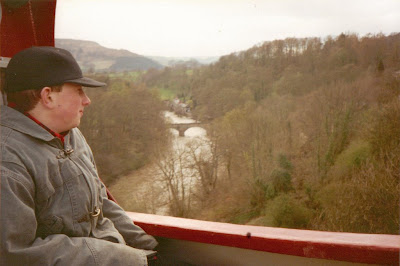 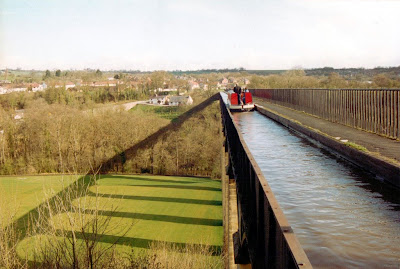 We took the boat right down into Llangollen and on the way I rescued a poor little lamb that had fallen into the canal, nearly falling in myself in the process.  The water was freezing but the lamb seemed none the worse for his adventure as he trotted off back to his mum. 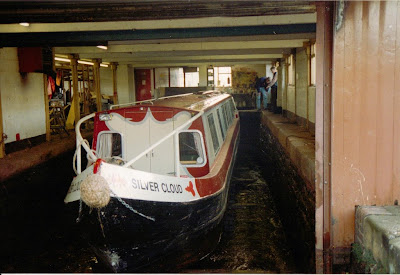 That night it snowed.  Next morning we returned the boat to Trevor where they were not at all pleased with the folk at New Mills who had obviously left the repair for them to deal with.  They put the boat straight into dry dock and as we left for home they were welding up a hole in the hull.
Posted by Neil Corbett at 12:11 pm

Ooh, what memories - our first even narroboat trip was from Llangollen to New Mills on Silver Saturn, which, fortunately, was not sinking!

Neil, perhaps if you had looked it up you might have spelled it "Pontcysyllte"!