While I'm on the subject of out boat hiring days (see previous post) perhaps I should tell you the unforgettable story of Cherry.

She was a nice old boat which we hired from Middlewich Narrowboats in  1989 and the plan for our week's hire was to ascend the Trent and Mersey's daunting "heartbreak hill" up towards Stoke, then turn up the Macclesfield canal to Marple and along the upper Peak Forest canal to Whaley Bridge.  And back of course.

We arrived at the boatyard at the appointed time and were met by a very apologetic owner, Chris, who said there would be a delay as our boat Cherry was in the dry dock having a repair done.  Cherry was unusual in that she had hydraulic drive and it had apparently been overheating, so they were welding on a skin cooling tank.

Chris made us a cup of tea and we waited, and waited, and waited.  In spite of the situation I felt sorry for Chris as he was obviously very embarassed and he was desperately worried that we would be annoyed.  Time dragged on and we had more tea. Chris discovered it was our Peter's "official birthday".  Peter's real birthday was so near Christmas that we used to have an "official" one in June to give him a chance to have some proper presents.  "Peter, pick anything from the shop", said Chris, "it's yours".  I cant remember what Peter chose.  A mug perhaps.

Still no boat and it was early evening.  Chris was really distressed.  "She's very nearly ready but if you think you've waited long enough I'll arrange a bed and breakfast for you locally at our cost."  We opted to wait a bit longer.  It was midsummer and it was light until 10pm so we still had a chance to put some miles behind us once we had the boat.

Eventually we got going at about 7.30pm, some four hours late, and made a bit of progress up the hill.  Next day (Saturday) was fine and we made it to the junction with the Macclesfield.   We had a bit of catching up to do and that day we 29 locks!   I love the lock architecture up there.  Each one seems different and the brickwork is brilliant. 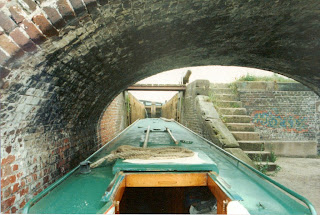 Then on Sunday we set off north and soon noticed that progress was very slow.  Cherry was struggling.  Those days there were no mobile phones.  We had no option but to slowly crawl along.

Soon we came towards a boatyard for Heritage cruisers.  Would a competing boatyard be interested in our plight?  A man came running out and shouted "Cherry.  Are you alright?".  We reported that we were not and to our relief he hauled us in.  "Chris asked me to look out for you in case you had any problems" he said.  "Chris is very religious and doesn't work on Sundays, so we'll sort you out here.  We happen to have a mechanic here today who knows about hydraulic drives."  Once again we were offered tea.

It was our lucky day.  The mechanic dismantled a hydraulic valve and found a piece of swarf blocking it, and soon we were on our way.  Suffice it to say that from then on we had a wonderful trip apart from me losing my favourite sun hat overboard.  There is some beautiful scenery up there. 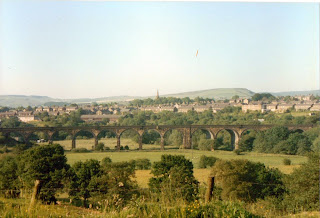 On the way back down the lower end of the Macclesfield we once again became very slow, but with hindsight and experience I know now that that was because the canal was extremely shallow.  We saw a boater putting life jackets on his kids and I nearly shouted out not to bother as if they fell in they could have paddled out!  Peter, about ten years old then, did his first ever solo lock gate watched by Claire. 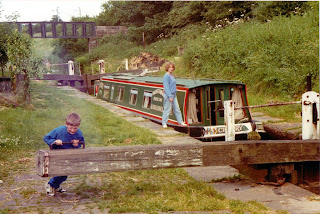 Did our experience put us off boating?  Absolutely not.  It just showed us what a kind and helpful lot the boating community can be.  A few days after we got home we had a nice letter from Chris thanking us for our patience and enclosing a cheque refunding us a day's hire.

Next time I'll tell you about how another boat we hired was sinking all week.
Posted by Neil Corbett at 10:26 pm

No doubt these days you don't allow windlasses to be left attached to the lock gear!

I too have a Middlewich Narrowboats story which I will tell one day.

Well spotted! Anyway it was only a one foot deep stop lock, so the windlass wouldn't spin far.

Remember the swing bridge that Peter worked for Herbie and Tortoise on the Marsworth flight this summer? I do because I had to do it on my own today and was thinking "where's Peter when you need him!"
Carrie