And the Best Mooring Stop is . . plus Best Waterways Event

Well, I've surprised myself.  My choice for Favourite Mooring Stop 2010 is Fenny Stratford lock!!  By no means the prettiest or the most exciting, I've just had to admit that I aways enjoy staying there, whether it's doing jobs, walking down into the shops or along the path behind the hedge, or just sitting out by the water chatting to passers by.  As an additional bonus, it's a safe place to leave a boat unattended for a few days as we did in order to go to the Braunston Boat Rally..  A pleasant old chap from one of the houses opposite was deputising for the mooring warden there last summer and he did daily checks on the boats.  I would suspect that other boaters might find this choice surprising, but each to his own

Now what shall we have next?  having just mentioned Braunston, lets have an award for Best Waterways Event.

This year we attended three.  Here they are in chronological order

1. IWA Cavalcade at Little Venice at May Bank Holiday.  For a number of the liveaboard boaters at our yard this is their annual outing, so we joined in the convoy.  When you arrive on the Friday evening it is very chaotic as they sort out which boat goes where.  For those lucky enough to be booked into Brownings Pool it is well ordered. 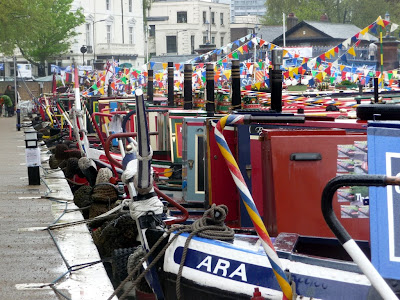 For the rest of us moored up the main line it is definitely not.  You just grab what spot you can as the boats moor up three abreast.  This is one of those festivals that is an annual gathering of old friends, so the organisers don't seem to feel bound to explain the goings on to newcomers.  Black mark.

There are of course some lovely boats there.  The artwork on this one  looks suspiciously like the work of a certain Mr Speight. 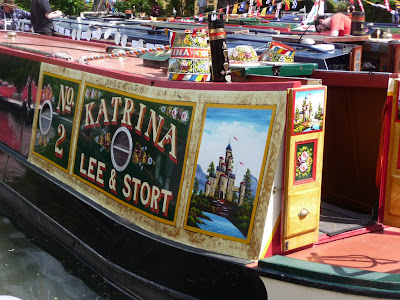 Some good craft stalls, a decent supply of ales and cider, a very good band one night, and a fine if somewhat hilarious parade of old boats.  Hilarious because of the problems of processing very big boats through very small spaces.  We had a grandstand view from aboard Simon's diminutive Nb Tortoise, and felt we were going to be demolished on one or two occasions.  The weather was nasty, a very cold wind and some heavy rain taking the shine off many events.  The best bit was meeting up with James and Amy from Nb Lucky Duck,  Sarah and Jim from Nb Chertsey and of course Simon and Carrie.  Lots of chat and a fair bit of cider if I recall correctly.

Another first for us and we really enjoyed it.  Leaving Herbie at Fenny Stratford we got buses and trains up to Rick and Marilyn and went with them to the rally.  A lovely hot day.  Free entry - just a modest car park fee. Crowds of people.  Lots of lovely old boats.  Complete chaos on the cut as they all crammed in together, 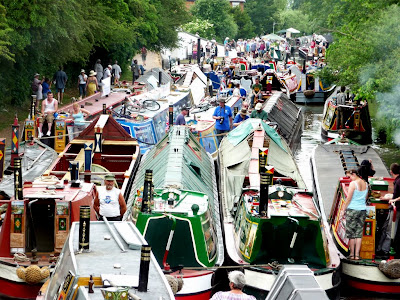 this is the main line of the Grand Union Canal!  A bit like holding a vintage lorry rally on the middle lane of the M1!  They have a fine boat procession with a good commentary on the tannoy.  It was especially good to see Sarah on her first showing of her newly restored Nb Chertsey. 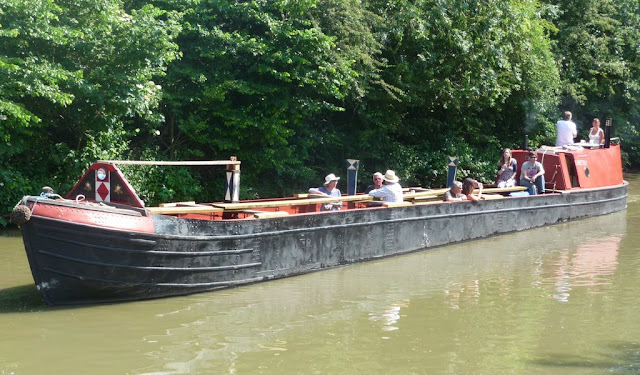 Cogniscenti will also spot a pair of Ducks sitting just forward of the cabin. The rally also had a good craft and canal bric a brac tent and the beer tent sold the right stuff.  Once again we ended up drinking and chatting with the Ducks, the Chertseys and the Tortoises.

In reality mostly a trade show although there are chances to attend a workshop or a talk.  Now you might see a pattern developing here because I have to confess that some time was spent talking to Simon in the beer tent.  As to the exhibits, there seemed to be a lot of people selling high value items such as engines and boat windows, but a disappointing shortage of chandlery stuff.  Of course various IWA branches had pitches, as did restoration groups.  There were a few show boats to look over too and a small number of historic boats.  I'm not at all sure the IWA have worked out what this show is really for.  It seems to me to be a bit of this and a bit of that and have no proper focus.  I suppose I could add that despite taking my camera, I didn't find a reason to use it.

Now, dear reader, from my comments I'm quite sure you can work out the winner for yourself, so I won't make you wait overnight.  So the Herbie 2010 Award for Best Waterways Event goes to the rather splendid Braunston Historic Boat Rally.  Well done them. I shall endeavour to return in future years.

Talking of which, as we are moving to Crick next spring, we shall have a free ticket to the Crick show, so that'll be one we'll get to in 2011.
Posted by Neil Corbett at 3:24 pm

I know what you mean about "organisers not feeling bound to explain...", only I would apply it to the IWA National Festival. Although it was slightly better this year as we went as mooring boaters, and were sent lots of useful information.

I really don't get the IWA. Despite having been a member for a number of years, it still feels like an exclusive club to which I haven't yet been invited. The National Festivals are geared up for the casual (non-boating) visitor and, as you say, the trade. When we camped at Red Hill last year I was surprised to receive a brass plaque when I signed in. Why don't they tell you that they are part of the deal? Just one small example. I could write more (if only I could remember it!)

My favourite was definitely Little Venice. A perfect waterside view, good company, music, falafel and (wonder of wonders!) a lovely puppet show on the nearby puppet barge.
Carrie x

I've never been to Braunston, but the festival always looks marvellously colourful and so rich with all the historic boats. But then, Little Venice is lovely too, and that I do know.

Don't know if I already have, but I keep meaning to point out there's a 'Herbies' pizza place in Bletchley, walkable from FS.

And finally, I've finally found my purpose in life. I'm a bad influence!