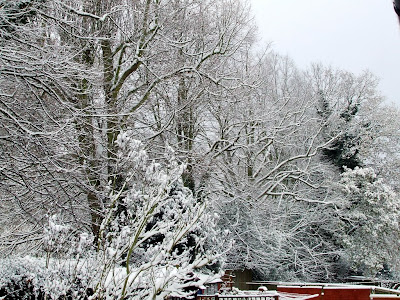 The view from my window as I write.  My car is abandoned in the snow a hundred yards down the hill from the house.

My good friend Terry Conway who lives up in Allendale, wrote a wonderful song called Winter's Weary Snaa and the last verse and chorus goes like this (to be read in a broad Northumbrian accent)

This white stuff is a corse, ye pluff it aal in vain
And then ye find yon corsed wind
Has blaan it back again
I've often thowt meself
Heid doon against the sting
The squirrels has the best idea
Gan beep po's till the spring

I guess you might need a tad of translation:  Corsed -cursed, pluff - plough, beep po's - to sleep

Terry is semi retired now but used to be a snow plough driver across the Northumbrian fells, so you can imagine that this song is very heartfelt.  I get very cross when people on telly complain about the lack of help from the authorities in this awful weather.  Let them have a go and they'd soon see it ain't that easy.

What has this to do with the Award for  Best Boater's Accessory?  We had some great wintery suggestions form readers.

Is it the hot water bottle I suggested, and Carrie warmly endorsed in her comment?

Is it the fantastic battery powered tiller hand warmer that Sue on Indigo Dream has?  (I want one)

Is it the Eco fan that wafts the warm stove heated air round the boat as suggested by Rick?  By the way Rick it doesn't work by peristalsis but by  placebo effect.

No it has to be the camera.  How else could  show you today's snow, and reminders of warmer times like this favourite from earlier this year.  I call it The Driving Lesson. 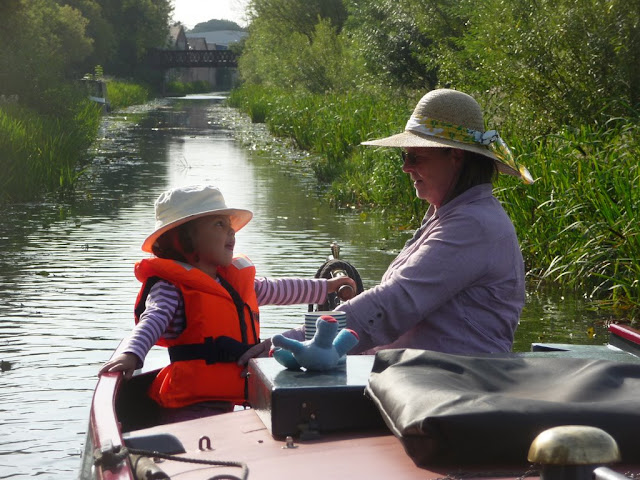 Yes, that is a great photo, Neil. And, yes, the camera is an essential item for blogging boaters (or boating bloggers). (Bruce of Sanity Again, please take note!!)

Lovely photo all....I do agree with the camera award. They help to keep the memories alive long after the travels are over.

certainly a far better picture than the one in the last post...

It took me a while to figure that one out Simon. No, he's no spring chicken but not that old.

Can't argue with that award - we've so enjoyed the photos from our cruises (and the photos on other blogs). They scroll through on my computer screensaver - no wonder I never get anything done!