Some years ago in a photo gallery shop in Queensferry a lady shop assistant asked me to move aside so that she could access some photo drawers.  Her polite plea to "mind your wee knees" in her delightful Scots accent has remained a family saying ever since.

Today I forgot her advice and now I have very sore wee knees from kneeling on Herbie's roof scraping at the snow and ice.  A broom proved useless and a shovel would have scratched the paint , but a quick rummage in the kindling box produced a handy sized piece of plywood which doubled as a scraper and shovel.  Under the snow, at the side of the roof there was an impacted layer of ice about half an inch thick and it took a fair bit of shifting.

Anyway, we have now gone from this 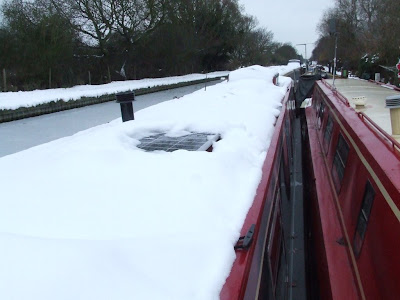 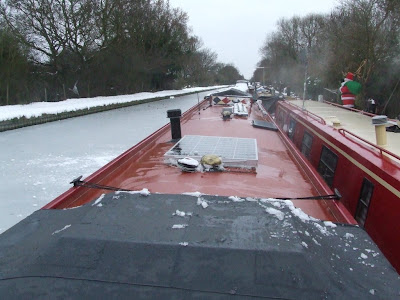 and there is a large pile of snow and ice on the frozen canal surface.

The good news is that my newly acquired waterproof gloves (from Black's) did their stuff brilliantly.  I had my hands on cold wet snow and ice for the best part of two hours.  The outer of the gloves was soaking but inside was dry and warm. £24 well spent.
Posted by Neil Corbett at 5:05 pm

It's good to see that Santa is doing his rounds despite the weather.

Thank you for your lovely card! A Kath creation by any chance? Have a peaceful Christmas you two.
Carrie x

You brave soul you! Happy Christmas to you and Kath!