And so to our first Herbie Award for 2010 - Best DIY gadget (surprise surprise).  Please excuse me if these are rather painting orientated this year, but they would be wouldn't they.

And the nominations are

1. Craftmaster low tack masking tape - amazing stuff that leaves a razor sharp edge and no trace of where it had stuck.  Especially good for cheating at signwriting if like me you don't have a steady hand.  Click the picture up big  to see the edges I got here in this part finished stage.  No bleeding anywhere and no residual marks.  Good for coachlines too. 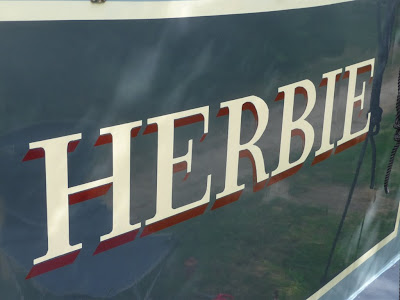 2. Craftmaster coachpaint (No I don't work for them).   - more amazing stuff.  I'm sure other leading brands do as good a job once they are on, but this stuff is so easy to put on compared with the rest.  It flows like milk straight from the tin even though it has a higher percentage of pigment solids than other paints.  Here is me with the roller and Rick close behind tipping off with a nice Purdy brush.  Note how well this first coat is covering and look at the gloss.  We could do one side of the boat in about 40 minutes if I recall correctly. There's that masking tape again  (the red stuff) 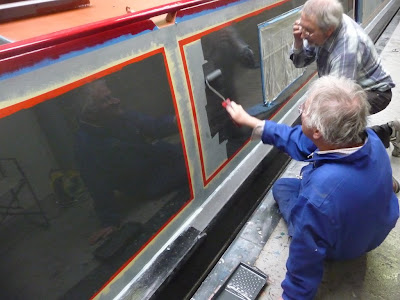 3.  Brush Mate .  I mentioned this a couple of years back when I'd bought one but hadn't used it yet.  Now I have, and it's brilliant.  Here it is. 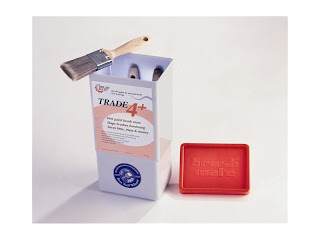 It's just a tall plastic box with some hooks inside to hang up paint brushes.  The secret is in the chemical pad inside which produces a vapour which prevents the paint from drying on the brush.  Next day you just take out the brush and carry on painting.  No brush cleaning, no wrapping them in cling film or dunking in white spirits.  And the amazing thing is it works for months and months.  I keep a brush with black paint in it and if the gunwales get scratched I can just take out the brush and paint over the scratch.  The paint is still wet on the brush six months later!  Another good thing is you can hang a number of brushes side by side, each with different colour paint.  It works for all oil based paints.

4.  My Bosch lithium ion portable drill. At last a battery driven drill that has some welly and the batteries stay up for ages.  If like me you only use a drill occasionally, the lithium ion batteries make a big difference because they hold their charge over  long storage.  As for the welly, well when I was making my solar panel frame I used it to tighten up a bolt.  Unfortunately I held on to the wrong half of the assembly and when the bolt reached full tightness the long bit of the frame was swung up by the drill giving me a smart smack on the head!  I still have the mark.

Not really a gadget, but a special mention for the High Line Yachting wet dock at Cowley.  A super place to work with good heat, light and ventilation and at a very competitive cost.  I haven't seen better.

There is one thing I have not nominated, because I don't have one.  However I reckon it would have been a boon on many occasions this year.  A head torch.  Perfect for working in dark or gloomy confined spaces leaving both hands free.  I think plumbers use them these days.

Who will win? The golden envelope will be opened tomorrow to reveal the winner, and we'll move on to the next thrilling category.
Posted by Neil Corbett at 12:41 pm