The Herbie Award for 2010's worst bit of canal

This is a tough one.  Not because we have encountered much to complain about this year, but because I like nearly everywhere we go.  However, certain bits of the waterway in certain weather conditions or times of the year can be a real pain.

Let's start close to home.  The dear old Slough Arm.  I love it really and as you can see from the picture I use at the head of the blog, it can look very pretty.   Not bad at the other end either except for a bit of graffiti. 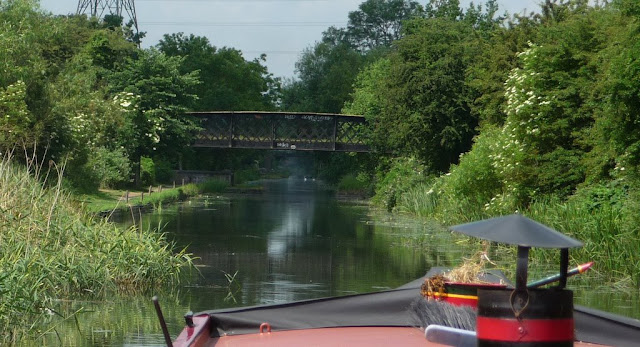 Remarkably clear water, loads of fish, greenery and waterfowl.  What's the problem?  The dreaded blanket weed that's what. Every summer it becomes nigh on  impassable because of the weed.  Us boaters are surely to blame because the densest weed growth is alongside the boats at our yard at Iver, and when I say dense I mean really dense.  Great thick blankest of green cotton wool that seem to clog the whole width and depth of the waterway.  It can clog a propeller in seconds.  That is the one thing that I shall not miss when we move Herbie to Crick next year.

Next contender.  The Regents Canal south of Islington.  That Regents Canal? Yes, I know it is lovely through Madia Hill and Regents Park, and great fun at Camden market but . .

It all starts at City Road lock just beyond the Islington tunnel.  A nice enough spot, but it has the most frustrating lock I think I have ever encountered.  It seems that whatever you do, the bottom gates want to swing  open on their own.  You walk round and shut one, and then you charge round the other way, leaping over balance beams  and nearly falling into the adjacent unused lock, but its no good.  By the time you reach the other gate the first one has swung open again.  To add insult to injury, not only do these gates swing open, they are real pigs to shut.  Something is seriously out of balance.  There are some heavy gates further down this stretch too and beyond Ducketts Cut  a number of places are really vulnerable to side winds, so the poor person waiting on the boat while you do the gates gets blown into the far bank.  Drab too, this bit.  And so on through to the final lock at Commercial road which seems to have permanently broken paddles and takes ages to operate.  But what is even worse, it nearly always seems to be terrible weather when we go down there.

After that I'm struggling to think of another really bad bit on our travels this year, although quite a few locks in the  chilterns do suffer from gates that swing open, they are not in the same class as City Road.  So I'll declare here and now that the Regents Canal takes the biscuit  Award for Worst Bit of Canal in 2010  .

Neil
My nomination is the Swan Arm on the BCN:
http://captainahabswaterytales.blogspot.com/2009/10/swan-arm-wednesbury-old-canal-bcn.html
Third photo down says it all.

We're very fond of the Regent's Canal but it does, as you say, have its moments!

At that lock, Richard has resorted to lassooing the opposing lock gate and tying them together before racing back to get a paddle open. As he's sometimes contemplated using his belt for this purpose it adds a whole new level of canalside entretainment....

I havenae used City Rd Lock in anger, although it is quite close to where I am currently billeted. It sounds like it could be one of those locks where the best approach is to leave the paddles on the top gate a little open so that you get a flow which prevents the bottom gates opening. The pound above the lock must be a good mile long so there's plenty of water!