Broads sailing and a new (to me) way to reverse a boat.

Miraculously, the Bowsprit Trophy, awarded to the skipper who inflicts most damage to his boat on our annual Norfolk Broads sailing weekend, was not won this year.  So I suppose we have a rollover until 2012.

I say miraculously, because although we suffered none of the rain that refreshed the rest of the UK this weekend, we did have some scary moments in unexpected periods of stiff breeze while we were out in exposed places.  Tootling up to Hickling Broad on Saturday morning it was a very gentle breeze and bright sunshine. Easy sailing. Then in the space of half an hour while we had a picnic and a pint outside the Pleasure Boat Inn, it all changed.  The wind suddenly got up and we were faced with having to get away from the landing stage into a stiff headwind.  Not easy with shallows to the right and left.  It looked like an "award winning" opportunity. After a committee meeting to work out how it could be done, we reefed the sails down and took the plunge. 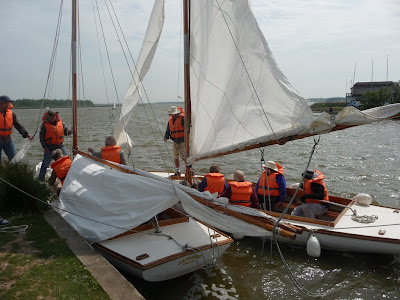 You don't get two goes at it, you either get away, or you get blown on to the shallows where you are well and truly stuck.  We decided the only way was to give the boats a good shove off  by someone on the bank pushing the end of the boom at a run. The first two boats away had us to help push off, but us in the last boat needed to recruit a passer by, who luckily seemed to know what he was doing. Somehow all three boats  managed it and survived to tell the tale although we collected quite a bit of water over the gunwales by the time we got back  and we had a few white knuckle moments on the way.  Out in the middle of the broad it gets pretty windy. 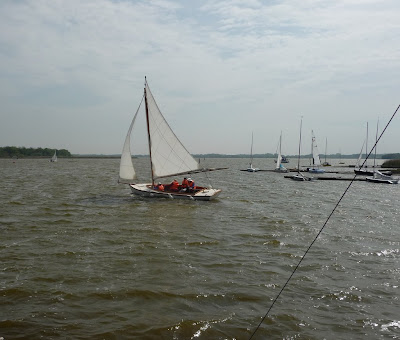 Monday was my favourite sail, because we got off the beaten track.  Not only were we once again east of the ancient and very low Potter Heigham bridge where the big cruisers have to call it a day, but we took advantage of a favourable wind to sneak up the narrow winding creek into Horsey Mere  - within sight of the north sea if the dunes didn't intervene.  I love these quieter parts of the broads where all you can hear is the whispering of the wind in the reeds and trickle of water under the bow of the boat.

Up at the moorings at Horsey I witnessed an interesting boat reversing technique.  Before reversing out the the moorings on a cruiser, the skipper heaved the mudweight overboard (still attached by rope of course) at the front of the boat.  Sorry the photo is a bit blurred. 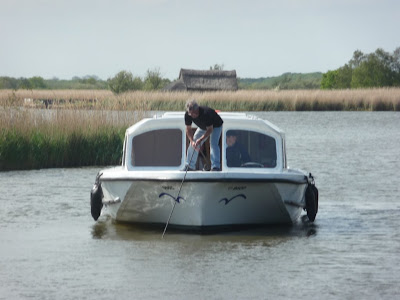 He then proceeded to back off, dragging the mudweight as he did so  and thus keeping the boat from wandering off line in the breeze.  What a good idea.  It might not work on a canal though because of the risk of snagging the mudweight on a submerged object.  Worth a thought though.
Posted by Neil Corbett at 4:52 pm

Knowing my luck my Danforth would find one of those hidden trapdoors!

I believe a bucket on a rope is often used to achieve the same effect.