If you think some canalside areas are rough now, read on . .

I just found a truly wonderful account of life down by the Limehouse cut written down in 1897.  We've cruised though here on quite a few occasions and lived to tell the tale.  Here we are entering the cut a couple of years ago. 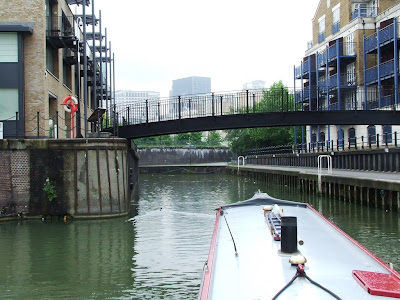 This is not a posh area today by any stretch of the imagination, although it is going upmarket fast, being very close to the new Olympic park, and to Canary Wharf.  However, it was once very very very very very rough.

The account is from the Charles Booth online archive currently hosted by the LSE.  I stumbled on it whilst doing some genealogy research. Mr Booth commissioned an inquiry into the life and labour of the people of London.  One of the things they did, was to walk round each district in the company of a senior police officers and write down what they saw.  The archive has digitised images of the notebooks used, and from one of them recorded in 31 May 1897 I pass on these extracts.  I am assuming that being that old, and being freely available on the web, they are out of copyright.  Anyway here goes.  The surveyor, who was walking in the company of Mr Carter, District Inspector of police, wrote many pages, but here is a short extract.

Inhabited by many Irish workers in the Gas works, a rough lot given to drink and racing and betting.  Whippet racing a favourite sport for Sundays.  Whippets are dogs of the greyhound type, smaller than regular greyhounds, but larger and stouter than Italian Greyhounds.  Blackthorne Street is perhaps the worst Street of this block.


South of the Devons Road are Glaucous, River and Weston Streets,  getting worse as they approach the Fenian Barracks.  The block of streets between Gale St. and Furze St.  (still there today) are the worst in the district, worse than almost any district in London. Three policemen wounded there last week.  This block sends more police to hospital than any other in London.  Men are not human, they are wild beasts.  You take a man or a woman, a rescue is always organised. They fling brick bats, iron, anything they can lay their hands on.  All are Irish cockneys.  Not and Englishman or a Scotchman would live among them. The group is know as "the Fenian Barracks". The streets have all the appearance of semi vicious poverty - hatless women, uncleaned doorsteps, two or three women drunk,  shoeless and ??less children in great numbers, notwithstanding that at 3.15 they should be in school.


In Hawgood(?) Street a group of young men between 18 and 20 years of age playing pitch and toss. One older man of about 25 to 50 years among them.  Consternation at our appearance.  Free fight to get out of the circle. Carter surprised at their having let us get so close. "What were the Crows doing?".  Crows being those put to watch and keep care.   Eastward Street the roughest part of this rough lot. All knew Carter by sight well.


At the corner of Hawgood Street the doors leading to a fat refinery. Not only are the inhabitants savage, and think nothing of taking a human life, the beasts are more terrifying.  "You should come down here of an early summers morning, if possible after a shower of rain:  Rats - not in twos or threes, or 10s or twentys but in thousands and tens of thousands.  The streets will be covered with them, so will be the yard of the factory.  Rats, not small rats, but big and fat, the size of cats: you knock a ?? with your boots and away they go with a rush and a hissing sound made by their feet upon the pavements that will make your blood run cold.  Most evenings or even during the day they will come up in search of water.  Water is scarce in the drains in which they live.  They will eat anything.  A load of hams was condemned by the inspector as unfit for human food and brought down by barges to be boiled down for train oil.  They arrived one evening, were unloaded and left till morning on the quay.  In the morning nothing was left but brown husks  from the outward appearance of the hams.  The rats had eaten all that was inside.  carter saw them himself.  What would happen if rat food ran short?


Things begin to improve as they walk further on.  Indeed, in Flint street, they encounter "prostitues of the better class, working the East India Dock


I don't know about you, but I get the impression, it's a bit better today.  I could go on, for the surveyors notes on this area continue for many pages, but I'll leave you to follow the link if you are so inclined.
Posted by Neil Corbett at 7:32 pm

I think it's positively tame by comparison now! The rat story was the worst though.

That's a great account - though you'll still find the odd rat around, as Lynx the hound can testify!