I'm always grateful for advice, and I quite often ask for it in these posts.  However sometimes you have to do the other thing.  This happens in two ways. First on matters of taste and judgement, where I ask how people like suggested colour schemes and I ruthlessly over rule their ideas on the grounds that I have a pass in O level Art (2nd attempt, 1964).  Then  on matters of cruising routes, where constraints of time get in the way.


This summer we plan to have a go at the Leicester Ring.  This rough sketch shows the route. 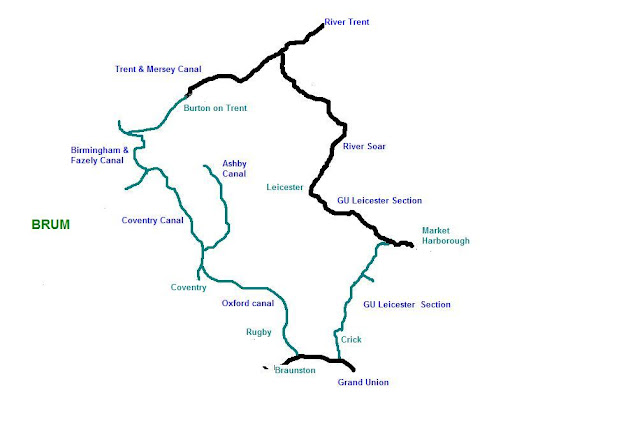 In the time honoured convention the heavy lines show where the locks are wide enough for 2 boats, and the thinner lines where they have single locks.  Altogether it's 150 miles and 105 locks.

To us this is new ground and so I've been reading up on the forums to get the lowdown.   By all accounts it's a lovely ring to do, but practically everyone says it would be best to go round in an anti clockwise direction.  I think this is so that you go downstream on the river and where the locks are biggest and heaviest.  Also, starting from Crick it would make sense to get the River Soar out of the way earlier on so if there are delays cause by flooding, we could make up the time on the canals.   Between Fazeley and Braunston there are only 17 locks - easy.

So why are we planning to go the other way?  Because we have what Linda Snell would call a window.  (If you don't know who Linda Snell is, you are better off staying that way). We want to go to the Braunston Rally at the end of June, and then we would like to complete the ring in time to do our annual pilgrimage to Shropshire (camping and walking) when the school hols start.  We could complete the ring easily in a fortnight, but what would be the point of that when we have a bit more time.  We'll likely detour to Coventry and Market Harborough and maybe we'll even sneak up the Trent and Mersey to Great Haywood  and Tixall wide for nostalgic reasons.

So the plan is to get through Braunston before the rally and moor as close as we can the other side  By then we'll have 17 of the 105 locks behind us..  Then after the rally continue on round the ring.  The wrong way.
Posted by Neil Corbett at 12:01 pm

I have done it both ways round and the only advantage that I can see going anticlockwise is to get the river out of the way incase the weather turns bad.

Thank you, Neil. You have just made me realise that there are actually many more miles of navigable waterway available to me. For once (if) I've done the entire system, I can do it again in the other direction! All I would have to do is remember which way I went the first time...

(We did the Leicester Section south to north a couple of years ago, but that was because it was a one-way trip.)

I went clockwise (with a long sidetrack up the Macclesfield and Peak Forest), single-handed and without a clue that it was advisable the other way around. If I can do it, you can do it much better!
Linda would applaud your spirit of adventure!
Carrie

WE rattled round clockwise in 10 days including a day and a half to Fradley at each end! Not that I am recommending this speed - far to fast and we missed lots but holiday limitations and all that. I loved the distant bits -so quiet and so few boats.
Just finishing the trip report on the blog in time for the BCN Marathon Challenge.

I am not yet a boater so ignore this with a clear conscience.

With the weather so far this year being so dry, it might be an idea to get high summits out of the way early so you know you will have better odds at having sufficient water.

I suspect this would be anti clock from where you are based.

Thanks everyone for your reassurance. Roger has a point though. There's me thinking about flood risk and the greater risk might be drought. Aah Well.

Amy -we will be in Cambridge on Wed and Thu pms. We'll give you a ring when we are there.