Monday night and the great extravaganza is over.  Just after the whole thing ended a rainbow appeared over the Boat Show festival site as if to give a final farewell to the weekend's events.  I think a few crocks of gold have been found too, as the word is that boat sales have been good.  I chose not to buy one myself. After all I would have had to sell my house to afford most of the boats on show!

We got a call from Adam and met him by the Canal Boat Magazine tent for a chat.  As the writer up of the boat descriptions for the magazine, he was nervously wondering how he could remember which boat was which after looking at 20 of them in a day!   Halfie dropped by too and caught us in the bar watching the last of the musical entertainment, which varied from very good to distressingly bad.

This is all new to us, for it was our first time at Crick Show. It was pretty much as we expected, lots of stands offering new ways to spend our money on boaty bits.  As well as not buying a boat, I also didn't buy an engine, although there were plenty to choose from.  Instead I chose to buy a can of grease and a drum of engine oil - and, I've just remembered, a super old coach lamp whcih deserves a post of its own so you'll have to wait for that.

Rick and family joined us on Saturday, as did Simon and Carrie so eight of us crammed on to Herbie for lunch.  Surprisingly we all managed to sit within sight and sound of each other. Amazing the crowds that Herbie can absorb!

As we didn't intend to actually buy one of the boats on sale, we thought we would look over only the very best ones, to see what you got for your money.  Boy, there are some clever people out there.  The standard of workmanship and imaginitive designs are something to be seen.  Having said that, despite the wonderful craftsmanship and sometimes beautiful lines of some of these boats, I can't help feeling that they are too posh to go boating in. These boats are the equivalent of the houses on Grand Designs on TV.  Entirely bespoke, innovative works of art, but not the sort of place I'd like to live in. 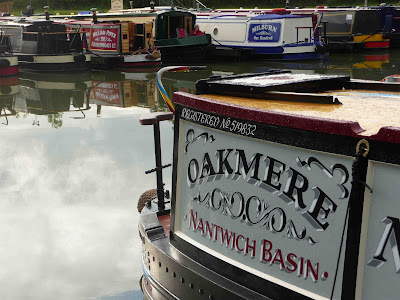 Probably the best paint job I have ever seen and internal woodwork to die for.  The best bit was a sliding cantilevered dining table ( to seat 6) that slid out into the saloon from under the tug deck.  How do they think 'em up?

We were going to vote it best in show, then Adam suggested we take a peak at Barolo a boat built by William Piper on a Tim Tyler shell.  Actually there are a few things I don't like about this boat, for one the hodge podge of shapes that make up the superstructure. 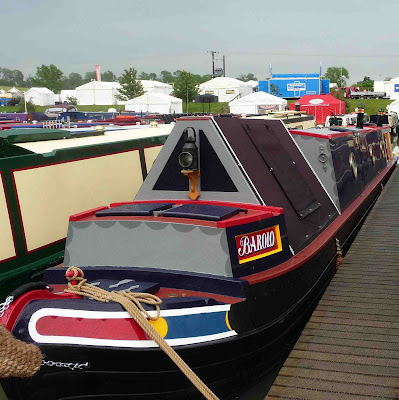 But inside, wow!! Entirely fitted out in old reclaimed wood, some of it hundreds of years old, and some of it, believe it or not from Oak panels salavaged from a refit at Buckingham Palace.  To be frank, it felt more like a lovely old cottage than a boat, and I'm not sure I would want to go boating in it, but it had real soul inside unlike the smart lavish extravagance of some of the other boats.  I'm sure you'll be able to see all about it in the magazines next month.  About £140,000 will buy you one.  Anyway we voted for that and were pleased when it won best in show because the team who built it had obvously put their hearts and souls into it.

Now on Tuesday morning the stands are coming down and the posh boats are taking their leave (not without some difficulty for the long ones!) 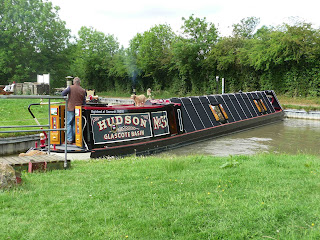 and we get back to real life.  Tomorrow we venture out from Crick for the first time and take our first trip further up the Leicester Arm to Welford.  It looks as though we may have a largeish crew.
Posted by Neil Corbett at 10:49 am

I have often thought the same thing about some of these ultra posh boats. You wouldn't want to do anything fun or relaxing in or near them for fear of tarnishing their pristine perfection. I've never been a fan of perfection anyway. Still, after reading some canal boat magazines, I am hugely impressed by the brilliance of their design. Sounds like it was an interesting show to have on your doorstep!

Pendlewood canal boats,Will be at crick next year with our High spec eco freindly wide beam.

Final desins are being tested and aproved.
What a great freindly show it was apart from a few over zelose exhibitors per haps first show nerves.