A Georgian Duke playing guitar in the middle of nowhere.

Flippin' 'eck, it's remote out here.  Once you get out of Crick Marina and turn right, you only see about three houses in the next four hours. I wondered why some of the folks in the marina seemed to talk of places in bridge numbers.  Clearly it's the only way to identify anywhere.  No locks, no habitation, no nothing.  If it's peace and quiet you're after, this is the place.  It's quite pretty though, and there are lots of places to pull in for the night or for a picnic.

The Welford Arm is especially nice and it has a lock!  The only one we encountered all day yesterday, and then again today on our return trip.  There are good moorings there too, although it was too full for us to get into the basin, but the 14 day moorings a bit further back were more than acceptable.

The reason the place was so  full was presumably that others, like us, had come to see Mikron Theatre outside the pub, doing a play about the Duke of Bridgewater. (Not nearly as dry as it sounds) As usual they were very well recieved and there was a decent crowd to watch them.  We're long term fans of Mikron but I wish they didn't use modern instruments in period plays.  A man in a wig and a Georgian coat just doesn't look right playing a modern guitar. 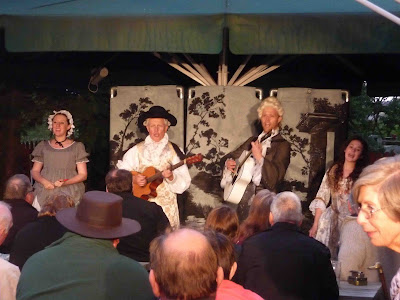 Please excuse the fuzzy picture, I refuse to use flash on such occasions and the light was fading.

After the play, ten of us retired to Herbie for a nightcap, a record I think.  Tonight we are only three, me, Kath and Grace.  We spent a happy hour leaning out of the cratch feeding the carp in the marina and had several huge ones swirling right beneath us as we hung over the cratch sides.

When we got back to Crick today, we went into the village in the car and it refused to start after stopping at the post office. It has been getting somewhat temperamental lately.  Eventually we got an RAC man out and we got going but he tells us we need a new starter motor.  If we can't restart in the morning we ought to be able to bump start it apparently. We'll have to drive the two hours home without stopping.  I hope I don't stall the engine anywhere.