Not a lot of people know that

The other day we had cause to drive to Marlow and we drove in over the chain suspension bridge that we went under with Herbie in March.  I was reminded of the amazing amount of ironmongery there is in the river at this rather fine little town. 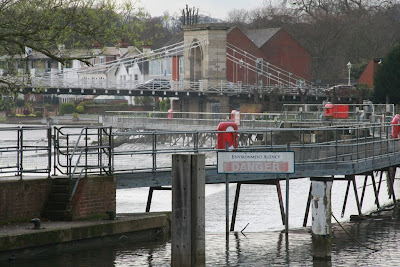 While we were moored there I went for an exploratory stroll which eventually led me to the town bridge and over it.  Its a suspension bridge made up from lots of chain links.  I think that in technical parlance that probably makes it a chain link suspension bridge don't you?   (cue arty shot). 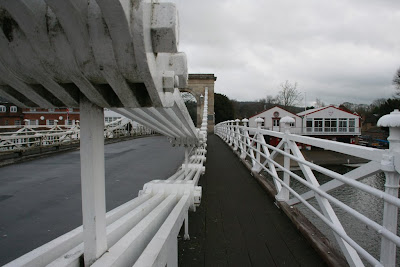 Anyway, despite vehicles weighing more than 3 tons being prohibited from crossing,  it shakes rather alarmingly when anything drives over.  I know because I was standing on it.  Upon reading it's history I discovered that it was only built in 1965!  Odd, because it looks a lot older and who would build a town bridge incapable of carrying lorries or vans in 1965?  Then I learned that it is actually a  faithful reconstruction of the previous bridge after the original presumably became even more fragile than this new one.  Well it was quite old, having been built in 1832 to the design of a Mr Tierney Clark.

Now I don't want to disparage the august Mr Clark, but apparently he built four suspension bridges of similar designs around that time and none survives in its original state today.  The ones at Hammersmith and Shoreham have been done away with entirely, and apart from Marlow, the only other survivor is another modern reconstruction but rather more famous.  It's the bridge that links Buda and Pest in Hungary.  Whether that one wobbles I don't know, but you can't blame Mr Clark for the demise of his original, rather blame a Mr Hitler, for it was destroyed in a WW2 air raid.

Whatever, the good people of Marlow must like bouncy bridges because it was them that insisted on the 1965 reconstruction of the old chain link bridge rather despite the offer of a more robust concrete one.  Good for them.

Now admit it, you didn't know that did you?
Posted by Neil Corbett at 5:29 pm

You should try standing on it and take a photo of the church or down the river at night to see how much it moves.

And did you realise that the "new" suspension bridge is on a bypass? The original wooden bridge was 100 yards or so downstream in line with the alley that rus the other side of the church.
Rainman.

No, I didn't, but it's interesting that they should want to re-create a bridge that obviously wasn't as strong as it might have been....nice, though!