Last night I was re reading bits of Idle Women – Susan Woolfit’s great book about women on the canals in WWII.  At last I was able to relate to some of the canals she worked on around Birmingham, and I was interested to remember that the route to the south via Fazeley and Hawkesbury was known as The Bottom Road.  According to Mrs Woolfit, the boaters didn’t like it a lot even though they got extra pay for taking that route She says the boats were sometimes sent that way because of “something to do with saving water”.  I’ll need to ponder that one.  Apparently the boaters objected to the very dirty condition of parts of the route, and also to the single locks.  Single locks are a delight for a single boat, but for a boat towing a butty they are hard work as you have to do every lock twice and manhandle the butty into the locks.

Anyway, enough of that.  All this inspired me to waste a few hours today in creating a Bottom Road CanalOmeter (with an extra bit added to get me back to Crick).  I don’t like to create one of these calculators until I have first cruised the route because you have to choose which landmarks to include, but having now cruised it i felt able to go ahead.  If you don’t know what a CanalOmeter is, then take a look at my CanalOmeters page which tries to explain everything.  Suffice it to say they come in handy when you want to know how long it will take to get to where you are going from wherever you are en route. 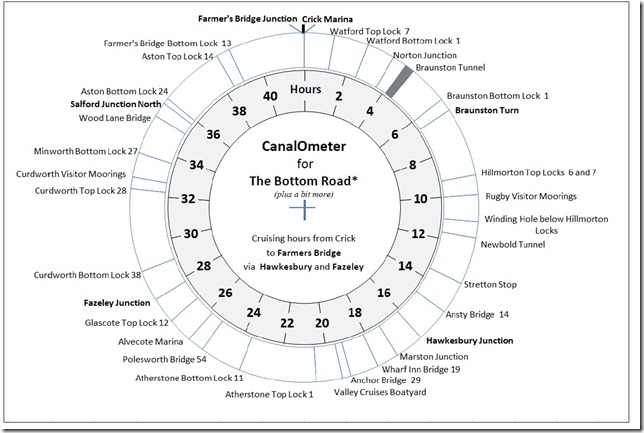 In fact I did it the other way round, starting at Crick and going up to Brum, but it works either way. If you’re cruising the North Oxford or the lower half of the Coventry or the B’ham and Fazeley canal you might find it useful.  One word of warning though.  When it comes to long flights of locks he calculations may well be well on the pessimistic side.  With a couple of extra crew and locks in your favour you can easily save a couple of hours up the Aston and Farmers Bridge flights.

I really ought to make CanalOmeters more frequently because if I don’t then I forget how to do it and it becomes a bit of a nightmare as I have to re discover all the tricks.  It’s all done with Excel spreadsheet pie charts and the formatting can be a bit of a nightmare.  Strangely enough, its the inner hours wheel that is the hardest to do. Anyway, despite a few more grey hairs it’s there now .  Click on my CanalOmeters page if you want to down load The Bottom Road as a PDF or any of the others there.  To make one all you need is a bit of card, a printer, a pair of scissors and one of those little brass paper fastener thingys.

I think the next one I’ll do will be the Stratford route.

Would it be possible to make your CanalOmeters the other way round with the hours on the outer section and places on the wheel?
If that was possible then maybe the hours could be pasted to a piece of plywood with a spindle and then the disc of wheel for the journey being undertaken could just be popped on the shaft.
I back piece with time and a selection of wheels with places on them.
Brian

Well I think the Mark 1 prototype was that way round. I get your point. It's an idea I might get round to one day.

However the reason I now do it this way is that some Ometers cover a 20 hour trip, some a forty hour trip and so on. If they were standardised on, say, 40 hours then for the shorter canals the landmark wording would be squashed up in a corner. On shorter routes I tend to put landmarks at more frequent intervals. Also getting the things aligned is a bit of a nightmare sometimes when I am overlaying the inner wheel over the outer. Achieving a standard size could be a bit fiddly.

Another one/group for your to do list would be the rest of the Leicester Ring based on your summer cruise.