Beep  beep beep.  Damn that alarm clock.  A long climb up into Brum and we thought we ought to make an early start.  I was feeling somewhat better after spending half the night in A and E* and I wasn't going to miss what ought to be a hard day but the highlight of the cruise.

First still in the countryside and a few locks at Minworth, then increasingly industrial as we closed in on Spaghetti Junction.

It's not only the motorways that meet in a tangle here, the canals do too, right under the mighty flyovers. 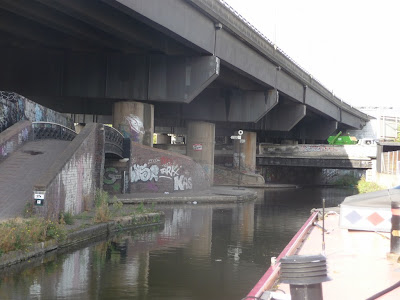 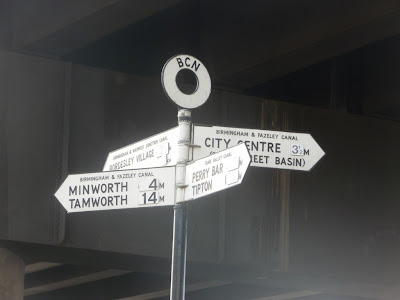 It would seem that a number of boaters get in a mess here, judging by the notice in the car showroom by the canal. 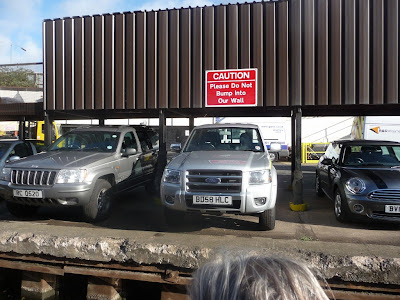 Then on into bandit country, Aston Locks, scene of Brum's contribution to the recent riots.  Armed to the teeth with er, windlasses, we stormed up the rather attractive 11 locks in the flight and saw no-one at all save a couple of joggers who gave us a friendly wave.
A quick bite of lunch then on up the final steep haul, the 13 Farmers Bridge locks raising us another 81 feet in half a mile.  The name Farmers Bridge conjures up a bucolic image of haywains and grazing cattle.  In reality it looks like this 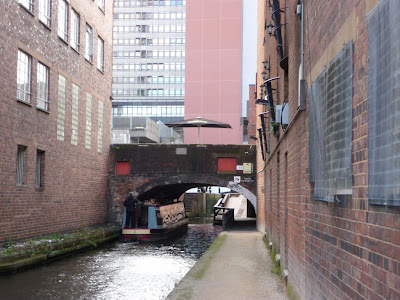 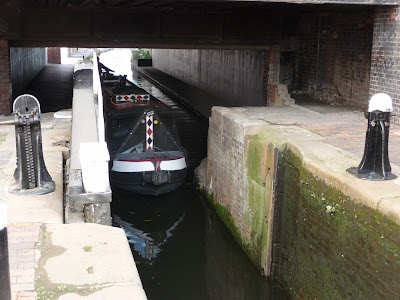 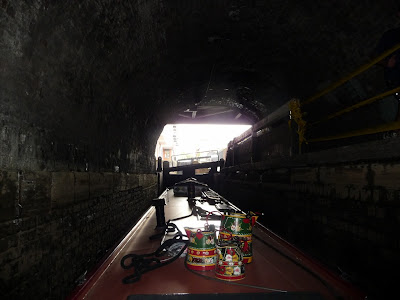 Dark, stygian, and often subterranean.  is it grim?  Not the tiniest bit.  One of the best day's cruising I can remember. It's great fun locking steeply up beneath the bridges and office blocks.  The three of us were running a team system.  Each person three locks driving, then six locks working.  At a lock every 5 minutes the time flew by.  So close are the locks that one office building actually had three locks beneath it with side pounds to absorb the water from the emptying locks.

We were almost sorry when we emerged at the top and saw the NIA building ahead. And loads of mooring space too.  We're right outside the Arena, just round the corner from Gas Street basin and a short walk from all the city centre attractions.  Brilliant. 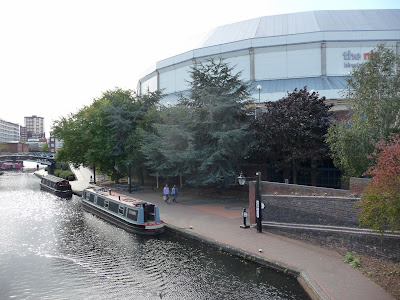 This evening, on a whim,  we've got tickets to see Andy Parsons at the Town Hall ten minutes walk away.  Nothing ventured .....

*PS I'm much better now thanks.
Posted by Neil Corbett at 3:09 pm

So glad that you're feeling better and able to enjoy one's of Brum's marvels...

Firstly, very glad it was nothing serious and you're feeling better, Neil. Secondly, I'm green with envy. I would so love to do this trip that you have done.

Glad you're feeling better, and glad you enjoyed Farmers Bridge. It's one of my favourite urban flights of locks. I love the bits under the tower blocks, and there's something special about emerging at the top into the centre of the city.