8.30 am. I sit here broken hearted.  This morning we set off down the Hatton flight after rising at 7am so that we could get as far as possible today in order to pick up Rick and co for a ride tomorrow.

Hatton locks are tough.  The hydraulic paddle gear takes some strength to wind, but we were undaunted. 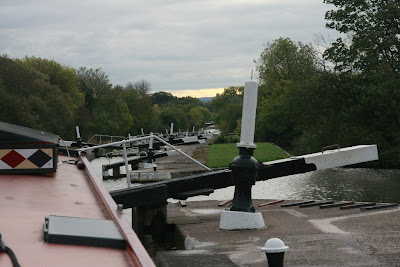 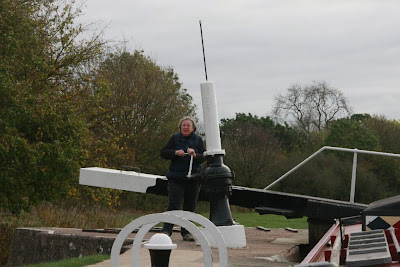 Then a nice BW man appeared.  "Would you mind pulling over after this lock and tying up for a bit?  There are empty pounds down at the bottom, and we have to open up eight turns on the paddles in every lock to feed water down the flight. It shouldn't take more than an hour and a half."

An hour and a half?  We should have been at the bottom by then.  We wouldn't have minded so much but we got up at 7am!

So here we are stuck waiting and I have a chance to update the blog with memories of happier times. 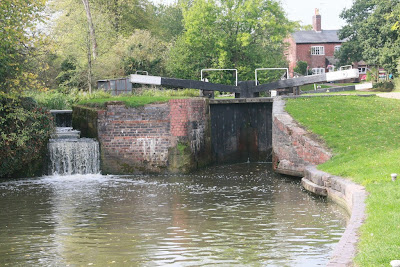 and an easy descent, 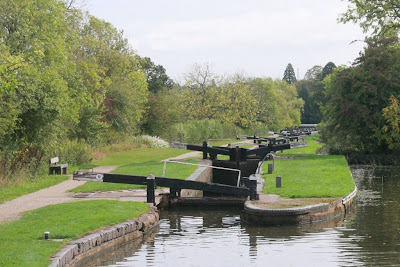 especially as we "allowed" two young boys to open and close all the gates for us.  We stopped after lock 14, leaving six to do next morning when David "Rainman" was due to join us.  We thought he would enjoy the narrow locks 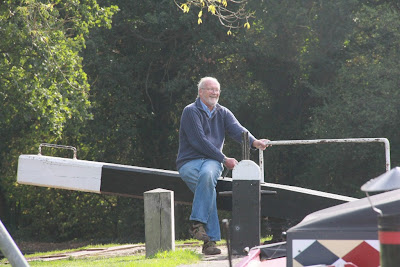 and we knew we wouldn't get further than Hatton top as he was only arriving at lunchtime.

Kingswood junctoion where the Stratford canal meets the Grand Onion is very quirky and interesting and we got a glimpse of the first of the Stratford's famous barrel roofed cottages. 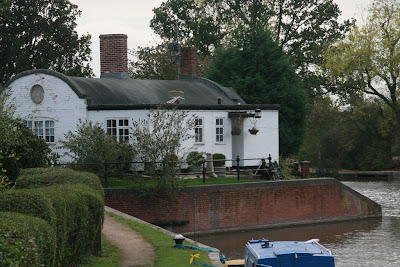 Now several hours and 28 locks later I am almost too tired to type.  The delay at Hatton was an hour, then we set off down the flight.  Those hydraulic paddle gears are flippin' 'ard work I can tell you.  I feel like I've been in the gym all day.

Our first trip through Warwick and Leamington was uninspiring and you see nothing of the best side of these two towns.   After that it's countryside and locks.

However, we are feeling very pleased with ourselves pleased because we've reached Long Itchington where there is a choice of pubs.  Looking at the Nicholsons Guide yesterday we thought it looked out of reach. Tomorrow we have a further four crew members so we intend to drive them like slaves while we take it easy all the way to the Folly at Napton.
Posted by Neil Corbett at 3:50 pm

If you're not going on the Thames at Oxford we might see you next week. We're heading that way in Shadow then.

I dont think that the Hatton paddles are hydraulic - i think they work on a worm gear principle. Not that that makes them any easier....

I'd stay a the bridge, folly has gone down hill and very expensive, bowl of chips £3.25 last time we were there.

We are coming past your front door - the one in Bracknell - on Friday 28th October. Will you be at home? Janet & Phil.