How the other half lives.

People speak of the North South divide as if it was all in favour of the South.  Well the divide sure showed itself to us on our last boat trip, but not in that way.  (Note to all real Northerners – I know that Brum is not the north*, but it’s as far north as we got, so bear with me. ) A pint of Brew XI (Brewed for the Men of the Midlands the old advert used to say) at £2.75 a pint?  Give me some more of that.  When we drink in pubs in the Home Counties you could easily add 75p to that.

As for food, we did eat out more than we ought, but sometimes I couldn’t believe the prices.  Best was at the Beehive in Curdworth on the B’ham and Fazeley where just after the cute little 57 yard tunnel there are the last good moorings before storming the battlements of Brum.  The Beehive is ten minutes walk from the canal and very unprepossessing from the outside, 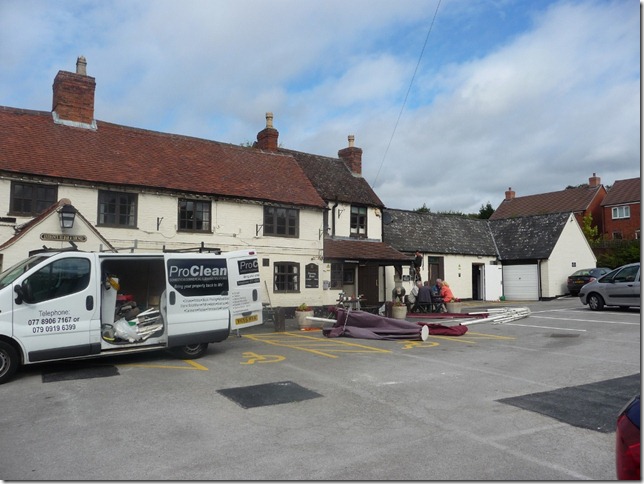 but this is a pub I would gladly visit again.  Inside it is friendly and comfortable and we had a rump steak with all the trimmings for £6 odd!  It was good too.  I just checked the menu of the Malt Shovel at Cowley, in many ways a similar pub a day’s cruise from London on the GU.  Identical meal £10.45.  At other pubs in the area it might cost a couple of quid more.

We might have paid about £9 or£10 at the Greyhound at Hawkesbury but the food there was of a quality that would cost £14 or  more at Bugbrook or Old Linslade, or Apsley  . .

I don't think Midlanders have too much to grumble about.

What about the fabled friendliness of the north midlands?  Well of course on the canal most people are friendly, we spend the whole day waving and saying hello. But once shore we’re back to reality.

All I can do is give an example of how we were treated one night. On our way south from Brum we moored on the pontoon outside the Bluebell Cider House at Hockley Heath not far above Lapworth.  That’s Warwickshire. Their on line menu showed tasty sounding meals for less than a fiver but we arrived at the moorings earlyish and decided to tidy up the boat, have a cup of tea and a shower before awarding the pub our patronage.  At 7pm our hunger got the better of us and we strolled up the garden path feeling suitably famished.  “Doing food tonight?” I asked.  “Oh I’m sorry, on Saturdays we finish food at 7”.  Imagine my delight!

Seeing our disappointment, the bar lady said she could always order a Chinese takeaway for us and found a menu from the nearest one and phoned through our order.   We each had a pint of their rather splendid Black Rat cider and sat down to wait.  When the Chinese food finally arrived, the pub provided us with plates and cutlery, which of course they had to wash up afterwards.  Actually we hardly had time to eat because we were deep in conversation with the locals about this and that, and got so friendly with one couple that we kissed goodbye when they left.

*footnote re Where is the North?


Many many years ago I was in a school in Sunderland talking to boys in their final year.  Unemployment was rife up there.  Prospects for these lads were very bleak.  In the South East there were jobs galore.  I asked one boy if he would consider moving down south if he couldn’t find work locally.  “Down South?” he pondered. Then stoically, “Yes, I would” he said.  I asked where.  “ I dunno, York or Leeds I suppose”.

We did better than that at The Cider House.
The story was the same as yours except my son and girl friend had driven over.
The answer we received was, "I am not doing anthing, I will russle something up for you if you can wait half an hour". We did and he did and it was very good.