Fame at last!  Lots of people have wanted to see the back of me, and now you can.  Here I am on CRTs latest recruiting poster 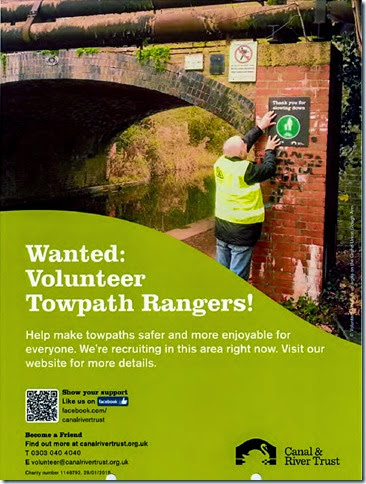 Not quite Lord Kitchener I suppose.  Quite why Dick Vincent chose that photo I can’t imagine, except that it was him that took it when we were down the Slough Arm recently.  Anyway since the grandchildren took some delight in suggesting what I might be doing or saying in the picture. I thought it might be fun if anyone out there could suggest an amusing caption.  I think I’m saying “Hurry up I can’t hold this wall up much longer”  but you might have better ideas. Over to you.  In case you can’t read it, the poster I am putting up says “Thank you for slowing down”.  The winner will get ten million pounds as soon as I have the money to pass on from a contact in Nigeria. ( I once gave a friend a million pound cheque for his wedding present, he still has it many years later.)

Dick is trying to get active volunteer ranger numbers up to 30 this year in the greater London area.  That means all the way up to the top of the Lee and the Stort, all the Regents and the Paddington Arms, and the GU from Brentford to Rickmansworth.  You don’t have to do it all of course, just a little bit of it.  The good thing is that there is no fixed regular commitment.  Tasks get announced and you can choose which ones you want to help with.  Sometimes publicity events, sometimes putting up or taking down signs, sometimes taking photos of something that needs reporting or checking on, or just patrolling an area in your own time and notifying any necessary towpath improvements or repairs or vegetation problems.    There are monthly ranger meetings which you get to if you can. The job is its own reward really but you do get a high vis jacket and a sweatshirt etc to show off in.

CRT is about to publish a national Towpath Code, a bit like the well know Countryside Code I suppose.  We saw the final draft  at our meeting on Friday.  Don’t get excited, it’s sensible but pretty innocuous, just telling us all to be considerate to each other and reminding that the towpaths are for all to enjoy.

While I was up at Little Venice for the meeting I had a good scout around  the local mooring situation and the completed work in Paddington basin. I’ll report on that in the next post.

I can just read it from here!

I cant find the braille bit !

Is it a good idea to go through the bridge with my eyes shut?

I told you not to use SuperGlue.