Here we are at Paddington waiting for Claire and Joe and the kids to join us for a short cruise. We had a good second trip down to Limehouse and back with Rick and Marilyn and got what is probably the photo of the year as we set off. No need to explain why! 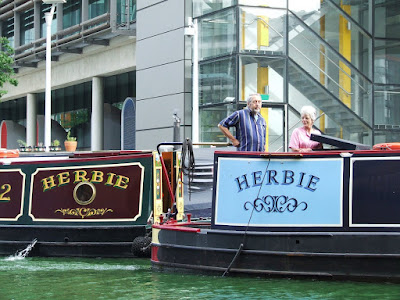 This time at Limehouse we took time out to explore the basin and the surrounding area. You can't see Herbie in this picture, but she's in there somewhere! 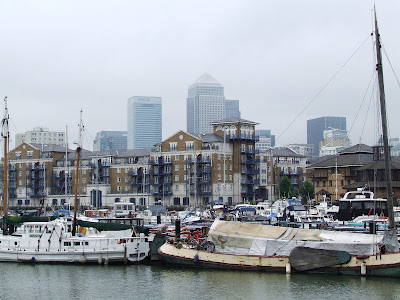 If you go to Limehouse we recommend you eat and drink at The Grapes, a tiny and very old pub once frequented by Dickens. It sits on the bank of the Thames at Limehouse Reach. Even older (1560) and better known is the Prospect of Whitby pub a short walk away at Wapping Wall past Shadwell basin. I’m sad to report though that whoever owns it now is failing to maintain its character and despite some interesting old upstairs rooms, we didn’t like it much.

I promise you that our preference for The Grapes was not affected by the fact that they were giving away free beer there. I know you won’t believe me but its true! They have a new Adnams keg beer called Spindrift and they were giving everyone a free half pint. Sadly, we didn’t like it even though we are Adnams fans in general. The rest of the beer there, and the food, and the ambience are all quite splendid.

So now we’ve been right across London by canal twice in a week. Strange to report that there weren’t many boats moving even though it is school half term hols. Finding mooring spots has been quite easy so far. Come to London to get away from it all!!

The free beer at the pub sounds.....almost smashing....was it on tap?

Swmbo says we miss you alongside, we are having to have BBQ's on ouyr own, hope to see you soon beofre we set off next sat.< but....she says....it has been easier cominging into dock when your not here :)

She hates flicking the rope over the roofs :D