If you can give me a bit of help now, you can have some free cruisng calculators later.
In October I showed you my first attempts at making my CanalOmeter crusing time calculator, and I had some positive comments and requests to make them available. See here to re read the post and see how it works. Field trials this autumn showed that the disc work quite well.
Here is the version I made then. Let's call it version A 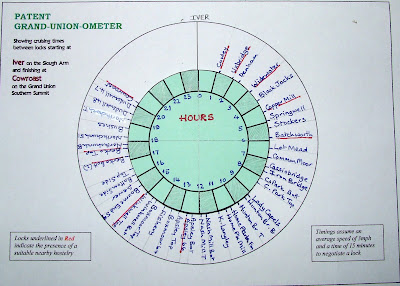 Now I'm trying to produce a version which doesn't need any handwriting or protractor work.
Nick Atty whose CanalPlan data I have used has graciously given me permission to publish the finished discs so other people can copy them for free. I intend to publish them as pdfs. First however, I want to arrive at the best layout.
The big problem is I can't find a way to print the place names along the radial lines. (Please don't suggest using WordArt, that would take forever!). So I've come up with two alternative designs, both generated using Excel's graphing capabilities. Version B below is easy to generate and I reckon I could knock them out really quickly. 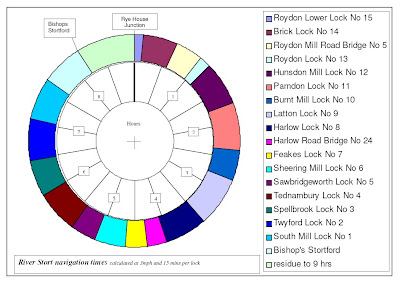 Version C needs a fair bit of fiddling about the draw the lines from the names to the graph. 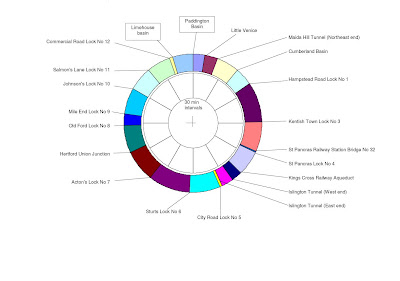 Sorry the images aren't all that good. As PDFs they'll look fine.

Any comments on which version you like best would be welcome as would any ideas for other ways to set them out.
I could also publish a manual on how I extract the data and process it so that you could do your own, but it's fairly fiddly until you get used to it. What do you think?
Posted by Neil Corbett at 12:49 pm

...or how about a slide rule kind of design, then no rotating words at all? I know, typical engineer, solving a problem by doing something else... mind you the paper mechanics would be harder.

Also a minor(ity) point, but years ago I realised all those ink cartidges just weren't worth it, drying out in between uses, so the only printer I have access to is the laser printer at work. As I say, probably inly me, but any designs that work in black and white always welcome. ;-)

It's a bit difficult to compare them as they won't enlarge on clicking. Er ... and the link to your earlier post doesn't work! Having said that, I prefer the design with the names of places connected to the ring with lines. I think it would be tedious having to look up what the colours mean on a key, as in your top design.