A noisy morning and a flying visit

Poor Richard(our eldest). He rarely comes to visit us but he was here last night and as he was knackered (being a shift worker plays havoc with his body clock), we suggested he had a nice lie in before I took him back to the station today.

At 8.30 the kitchen fitters arrived at our next door neighbours' house and started knocking holes in the wall, then at 9 o'clock some council men arrived and proceeded to dig up the footpath outside our house with a pneumatic drill. Then the final straw came at 10 o'clock when the Broadmoor hospital siren, just a couple of miles from where we live, had its weekly test. So much for Richard's lie in.

I drove him over to Slough to get a train home then took the opportunity of nipping out to Herbie to check her over. The canal was iced over and there was a dusting of snow on the path as you can see in the photo, 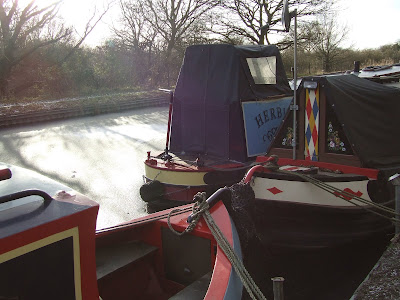 but inside the boat it was more than 10 degrees. Even under the floor where the water pump sits it was about 6 degrees, so I was reassured.

Mind you, that was early afternoon and the sun was shining. It will be interesteing to see howe far the temperature drops tonight which is forecast to be very cold. I left a min max thermometer by the water pump to record it.

If all goes according to plan we'll stay on the boat for a few nights starting Wednesday, so that should get her warmed up.
Posted by Neil Corbett at 6:33 pm

I don't know if you have electricity on board, but I use a little anti frost heater when I go away now. It's only a very modest 500w at full capacity and you can set its thermostat to cut out when it's reached the desired anti frost temperature. It does save a lot of worry, although we are only away a couple of days at a time, so maybe that would be too expensive for you. Just an idea anyway.

PS My sympthies to your son!