Don't it always seem to go . . (plus the story of the Ware gazebos)

. . that you don't know what you've got till it's gone.  Only when packing up and leaving the boat today did I realise that the storm the other night had blown away a piece of Herbie.  Our life ring.  I guess it's floating around Paddington basin somewhere, blown away by the wind.

Some people you just can't trust.  On our last day there Carrie dropped by for a cuppa.  Hooray! I was about to reward her for having got the correct answer to my "where is this?" quiz (see two posts back), when she admitted that she had read my answer before entering her guess.  Tut!  However, to err is human and to forgive is divine.  Carrie has erred and I have forgiven :-)  Nevertheless I have decided to withhold the £1m prize on this occasion to teach her a lesson.

21 days afloat and we travelled about as far as a car would take you in a short day. That's about the right pace I reckon.  We had time to enjoy and explore places and entertain friends and family.  I also got a fair bit of interesting ( I hope) blog fodder stored up.  I'll start with this: 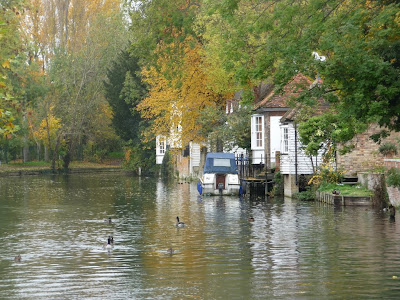 Boating on the river Lea through the town of Ware you can't fail to admire these gazebos.  Only 10 of them now, but there used to be 25 or so, and the originals date right back to the 1700s.  They lie at the foot of the gardens behind the High Street shops, and for ye olde shopkeepers  it gave them some respite from the bustle of the town centre.  Lucky them.   I want one.

Ihad a mooch around the Hertford record office and found some old copies of the Ware Society magazine from which I learned that the remaining gazebos were in a very poor state by the 1970s,  and in 1980 they started a campaign to save them, raising a couple of thousand quid to get a local builder to do some restoration.  Someone better tell Dave C that the Big Society was here all along.

But what about the owners then?  They must have thought it was their birthday. I wish someone would raise funds to restore my house.  I also found a note saying that one was for sale at that time and the society was looking into raising the cash to buy it.  I wonder if they ever did.  I bet they'd fetch a pretty penny now, what with  a beach hut in Southwold  up for sale at £40k (yes £40k !!!) earlier this year.

Anyway the 10 remaining look in fine fettle, like this largest one in very good nick.  In a book I found an old sepia photo of the same, including the little gatehouse.  At that time it was in a poorer state. 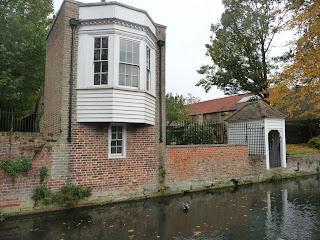