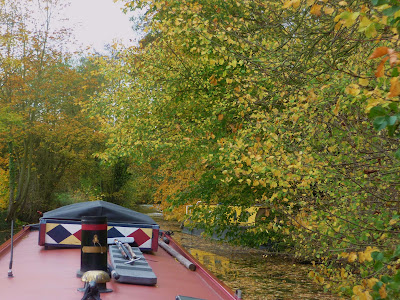 Aaw I know you spent a sleepless night worrying about Herbie after yesterday's near disaster, but really she is fine. The nice men redoing the towpath at Latton lock, scene of yesterday's smoke burst, were pleased, and somewhat surprised, to see we were still in one piece as we passed back through today.  Yesterday they had even offeerd us the use of their barge tug to tow us to a better spot if we were stranded.

Today we did yesterday's trip in reverse (not in reverse gear, just the other direction), and even after allowing for the time we lost with engine troubles yesterday it took an hour and a half less!!  The reason?  Yesterday all the locks were against us and today they were virtually all as we left them, set in our favour.  So few boats get up here at this time of year that if one has gone up before, it is very unlikely that another will come the other way to reset the locks in your favour.  The benefit of course is that all yesterday's locks were as we left them.

I enjoyed this morning's run.  The upper end of the Stort is like a slalom course.  Ninety degree bends every 100 yards sometimes and pretty narrow, so it's really good tiller practice. Up here you see alot of Dabchicks or Little Grebes.  These dainty litle birds scamper along the water in front of the boat before finally diving and swimming for cover under water.

One thing did keep slowing us down though.  The autumn leaves.  The Stort is like leaf soup at the moment.  They cling to the prop as though their little lives depended on it and you have to give a quick burst of reverse every couple of hundred yards or even less.

David (Rainman) has caught his bus home and know Kath and I are on our own again.  Five more locks and we're back on the straight and wide.
Posted by Neil Corbett at 7:27 pm

What adventures you've been having Neil and Kath! I've been out of the loop for a while for a number of reasons, but as glad to be back and catching up with all your doings. Apart from your near eclipse by smoke, it sounds as if you are having a wonderful autumn cruise. Good for you! And great stories too.