A little local difficulty! Herbie goes up in smoke!!!

Picture one. 9.59 am approaching Litton lock near Harlow.  We concentrate on the workmen. 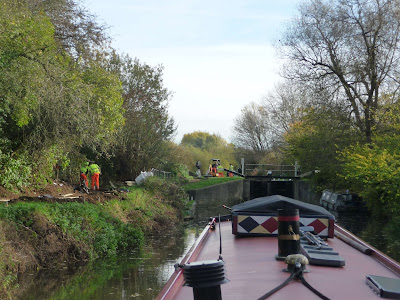 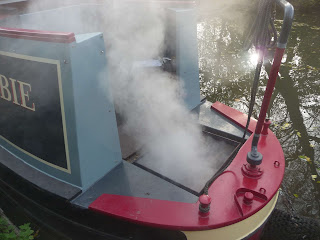 You can tell I'm a die hard blogger.  First I took photos, THEN  I grabbed the fire extinguisher.
The engine cut out just as we came in to the lock landing stage, and as we lifted the lid we saw the smoke.  Pound signs flashed before my eyes.  Fear and loathing followed next.  Then a more pleasant thought - I've always fancied a new engine.
River Canal Rescue were duly contacted and we sat outside in the pleasant sunshine waiting for a response and chatting to the workmen making a new towpath.  A couple of phone calls and an hour and a half later and a nice RCR man arrived having had quite a good walk down the towpath to reach us.
"Ah Herbie, Roy and Val's old boat, I've just come from servicing their boat.  They told me you were in the area"  (we had met them at the weekend).
By now the engine had cooled down.  It had been very very very hot.   It looked as though both oil and water levels were well down, so the conflagration had probably been a mixture of steam, and oil vapour from the air filter.  Both were topped up, and cautiously we restarted.  No water leaks, no oil leaks and no further smoke.  It seems that we were more lucky than I deserve to be.  I normally check oil and water every week or so, but they were a tad low last time and because I was intending to do an oil change later this week, I hadn't bothered to top up the oil which was above the min mark, but not much.  Mea Culpa!
We appear to have got away with it, the boat went well this afternoon and the gauges showed no further overheating, but from now on my weekly checks will be daily checks.
Two and a half hours were lost, but we elected to make a bid for Bishops Stortford anyway.  Every flippin' lock was against us and despite us setting a cracking pace, darkness was descending fast as we neared the town.  At times in the past we have entered into towns surrounded by swooping swifts and swallows.  Tonight it was bats.  We stole into town under cover of darkness, only spotting sharp bends at the last second.  Luckily the town moorings had light and space and you will I know be relieved to hear  that we are all in one piece and Herbie is shaken but not stirred.
An eventful day, and one I won't forget in a hurry.
Posted by Neil Corbett at 6:21 pm

Sounds like an eventful morning! Still not a bad day to be sitting and waiting, glad to see the curse of Rainman held off. I love that there is the boating equivalent of the AA, they should arrive in little, bright orange boats with flashing lights!

You'll have to cancel that order for a new engine - was it a nice new vintage you had in mind?

Hmm. Nice photo, but I think I'd have put the boat first!

I remember passing a boat on my travels, where someone was poking around in the engine. I yelled out...

'everything alright?'
'just doing my daily checks'
'you mean you're supposed to do them daily?' ;-)