Herbie is not a bad name for a boat, although we didn't choose it.  I don't know why the original owners chose it, but I like to think it was after a nice friendly person rather than a Volkswagen car.    Mercifully we get very few references to VWs from people we pass, and I can truthfully state that I have never seen (or wanted to)  the Herbie film, or is it films.  I'm not into anthropomorphism.  I have enough to put up with having Herbie's pizza leaflets through the door every week.  I've never had one of those either.   (Blimey, I just looked it up, and there were Six Herbie films! ).

However we have this year seen a couple of film related boat names that I did like.

First, up at Rammey Marsh on the Lee we see this.  Complete with photos of Bogie and Katherine Hepburn in their respective parts. 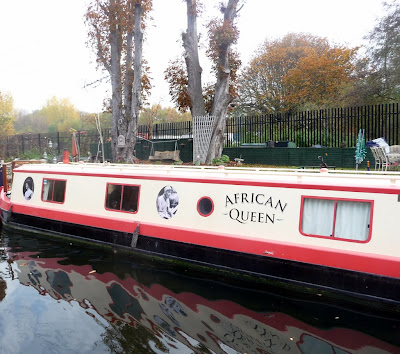 How do they do that?  Put a photo on the side of a boat.  They do it on buses and vans now don't they.
Anyhow, I like the idea because it's a great film and at least the African Queen was a boat.

And at Crick a couple of months ago we saw this: 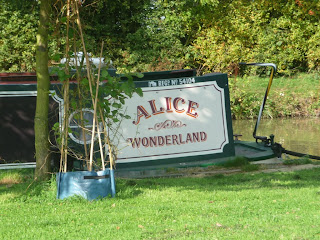 More a book than a film, but a neat idea.  In a similar vein, Our friends Robin and Laura have Miss Matty - Cranford on their boat.

No, we will not be having Herbie - Duisburg on our boat thank you.
Posted by Neil Corbett at 6:32 pm

Saw another 'Herbie' today at Apsley marina - think Simon may have sent you/blogged the photo last time we were were here?
Of course, it isn't a patch on Herbie no.1
I posted a pic of Alice (Wonderland) on my own blog! It's great, isn't it. I saw it up at Crick this summer.
carrie

Perhaps I should move Tortoise to Hare-field?

I seem to recall there were recent-ish Herbie remakes, too, which have been generally blanked from the collective conciousness for being, apparently, rubbish...