Perhaps that's a bit of an exaggeration. Anyway, coming down the Lee yesterday we were just passing the Olympic site 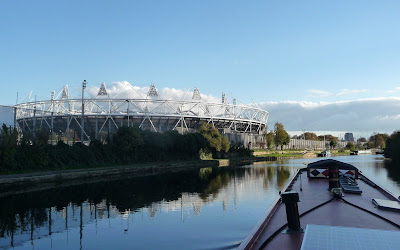 when a little boat with two men bristling with radios and binoculars drew alongside us.

"Good afternoon Herbie, what are your intentions?"  Difficult one to answer really. Intentions regarding what?  To live a long and happy life?  To enjoy the rest of the day's cruise?  Whether to turn right into Ducketts Cut or to continue straight on the Limehouse?

"We're going down to Limehouse for the night"  I replied.

"Will you be stopping at the lock for water or going straight through?

"Er, straight through. Are you coming down too?"

He was and while the lock emptied we attempted to grill him for a change.  Was he Olympic security?  Nod.
Where do you patrol?  I think he wasn't supposed to say, because he mouthed his answer silently while looking furtively around him.  If I tell you what he told me, I'll have to shoot you.  Suffice it to say they followed us as far as Bow Locks before turning back.

Almost all other questions were answered with "I can't really divulge that" and an embarrassed smile.

It was rather fun being followed, and I suspect our boat name is now on some log somewhere.

Our trip out of the Stort and down the Lee has been enjoyable.  On Saturday we took a day off and caught a train all the way to Woking (I know, we must be bonkers) to go to a family history fair that Kath was reluctant to miss.

On our return journey with popped into a building with this grand decor. 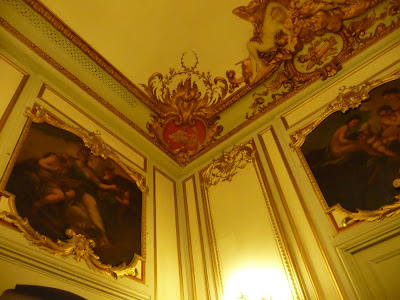 Any guess as to what or where it is?  Answers next time.

Meanwhile, whilst you may envy our cruise, you are allowed to take pity on us today because it was not too much fun coming back up the Regent's canal in strong gales and rain.  We sometimes have to pay for our pleasures.  Most of the locks were against us too.

Tonight we are tucked up in Paddington basin awaiting the arrival of a new crew member, Grace, who we will spend the day entertaining in London tomorrow
Posted by Neil Corbett at 5:30 pm

sounds like you have been having a good time.

Ah that's good, Indigo Dream won't be only boat on their 'most wanted' list any more! :-D

..er, is it the Wetherspoons bar at Liverpool Stree Station by any chance? ;-)
What have i won, what have i won??!
-Carrie