Cooh, I thought my picture quiz was hard, but those who did send in answers were all pretty good. Of course I suppose there might be quite a few who found it too hard so didn’t send in answers.  Anyway we can all marvel at those folk who did so well, and one of them reached genius status by getting all ten correct.  If I were a betting man (and I am one of those boring people who has never ever bought a national lottery ticket), I might have made some money because I thought that if anyone got them all right it would be Adam, and of course it was, although I suspect he was aided and abetted by Adrian.  Adam is one of those people who remembers bridge numbers, say no more.  Well done mate.

There was a bit of debate about the cattle breed, and whilst I have no proof it was a White Park, I’m 99% sure it was, and anyway my decision is final even if I am wrong.

While we were in Cambridge yesterday we popped in to see the Ducks, or the SevernerWillows or whatever they are called these days and had a short guided tour of the home improvements. Of course those who follow their blog will have seen them, but we can confirm its all true and things are vastly improved from our last visit when the boat was full of building materials.  Keep up the good work James and Amy.

We’ve been having a clear out at home and I discovered several old rolls of undeveloped 35mm roll film, so having discovered a company that will develop them and only charge if they come out, I sent them off having no clue what they contained.  Some were blank, some, like those below were OK but somewhat degraded, and some came back like new. As to content, amongst all the usual rubbish there were a few gems, including some pictures from our very first canal holiday in 1988 when we took a hire boat from Brewood and went up to Chester and back. 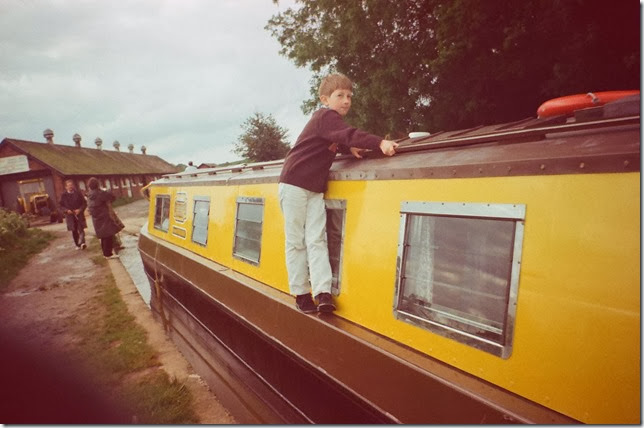 Here, above,  is our Peter looking very sweet aged 10 (now a rather larger 35 years old Dr Corbett and a member of the Royal Society of Chemistry), and below, here is me at 41 years old, (now also somewhat larger, sixty seven next week and a pensioner, and I still have that raincoat as a spare on Herbie), 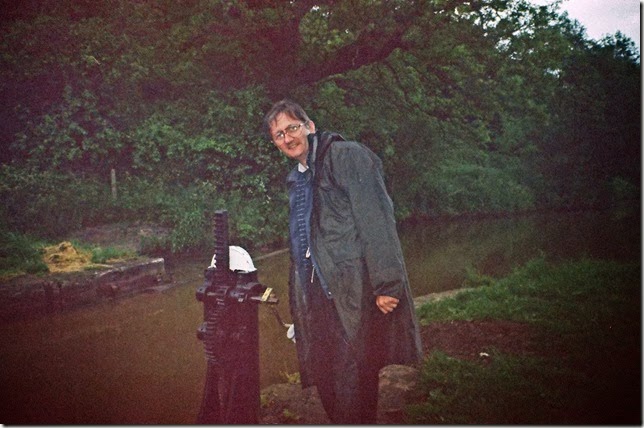 and here is Kath holding the reins at, I think, Bunbury staircase 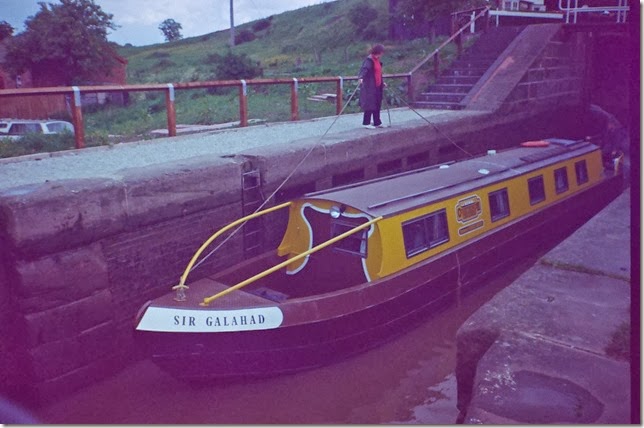 I can remember getting a copy of Waterways World that week and gazing longingly at the ads for Springer Waterbugs at about £7grand new, and wondering if we could ever afford to have a boat at our own. Twenty five years later and we’re still boating. Who’d have thought it?  I wonder if Sir Galahad is still going.  Quite probably.

Can you put the rest of us mere mortals out of our misery & tell us the answers to the pictures Please.

Happy New Year Neil! And now I shall study your lovely old photos! I didn't realise you'd been boating for so many years! All the very best to you and Kath for 2014 and many many more cruises to you this year x

Happy new year you two! I have a cold and my brain is mush so I only really, for-sure recognised the white park cow :-) No excuse though as I've been on/through/past several of the places others identified!