So little time and so much to do. Yes its nearly Christmas and we’re all busy. Well that’s my excuse for not having blogged for a few days anyway.  But the show must go on, for we have the Herbie Awards to finish, but before we get to the principal award, lets have a couple of final flings.  I’d like to give an Award to the best day’s cruising we had this year.  Oooh there have been so many good ones, (including the day trip to Gravesend but that was on Indigo Dream, not Herbie)  in the end I settled on June 29th.  Big round of applause.  I knew you’d agree.

Aah, I suppose you might want to know where we were on June 29th.  Well according to the date stamps on my photos it started like this. 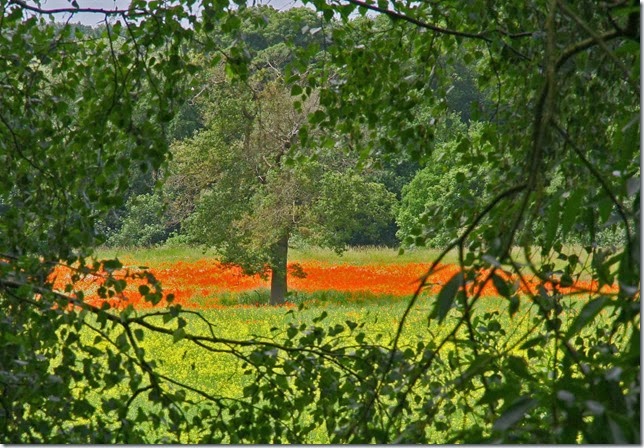 It was a lovely warm day, and not long after we got going I saw a lovely field of poppies.  As I was steering at the time, I managed to snap a view one handed as we passed a hole in the hedge.  Having taken my eyes off the canal of course Herbie headed straight for the bushes on the other side but that’s nothing unusual.

Then a bit further on we come to this happy scene. Well I’m fairly happy because Kath is doing all the work.  Now the canal experts probably have already recognised what canal we are on.  Pretty ain’t it. 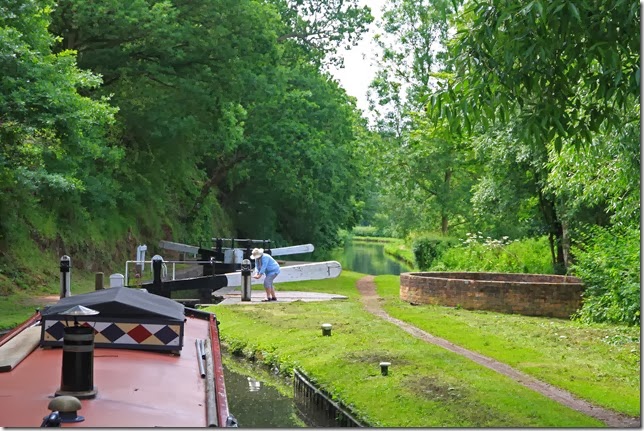 A bit further down we get to this 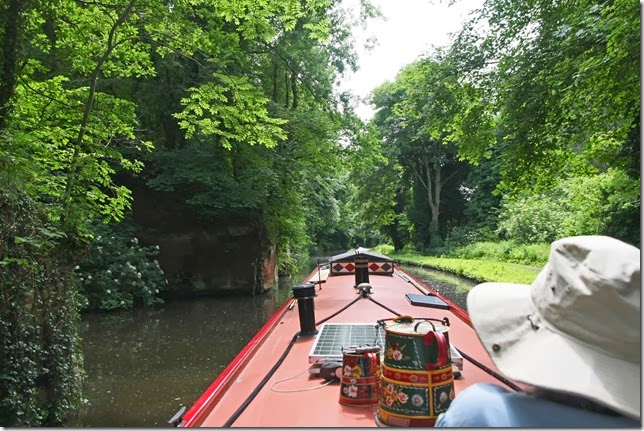 Aaah, the red sandstone gives you a big clue.  I took the next picture seconds later looking back. 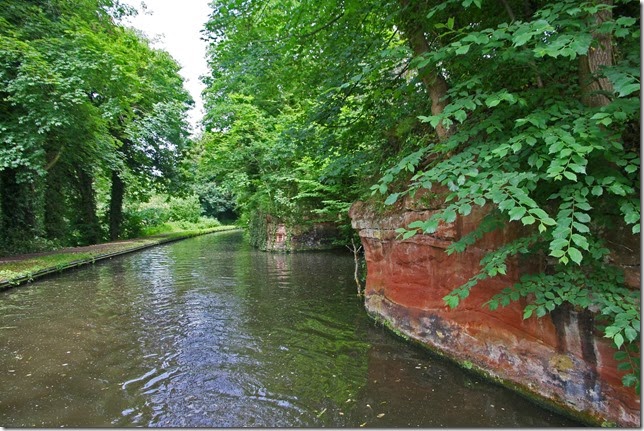 1. the weather was warm and sunny

2. the canal was very pretty, they don’t get a lot nicer

3. It was nostalgic for us as the last time we cruised here was on a hire boat in 1991. You do the math as they say.

oh I just thought of another reason (Spanish Inquisition syndrome)

4. We finished up at the Anchor at Caunsall.

Next time, for the penultimate award how about a brickbat award for the worst locks we encountered this year.

My shortlist would be

d) Hatton flight for being a few too many.

You can vote if you like. My decision has already been swayed more than once by yourselves this year.

PS I see the Chancers found spaces in Paddington basin.  I’ll write some more about London moorings after Christmas. Too busy now, but there are signs of hope.

Well, I came down Hatton flight with you this summer and I really enjoyed it!

I am relieved not to get another cruising award this year - the pressure would have been on to win another one next year but where could we take you that's more exciting than Gravesend??? :-D

Hi Neil and kath, I think it must have been your efforts that got us a space as quite a few boats are being noticed now!!!! Still 2 spaces here now so perhaps its keeping them out? Have a great Christmas both of you.

Ooh, the lock photo with that circular brickwork fills me with nostalgia. It certainly is beautiful along that stretch. I moored up there and cut up lots of wood while Milou brought me endless sticks...

The Buckby locks - I agree, hard work! Not on your list but the worse I've come across are the Erewash locks (Nottingham way) - stiff, heavy, rotting, every single one of them with a paddle or winding gear out if action - a solo boater's nightmare! Really made me appreciate all the well-maintained locks elsewhere.

It looks really beautiful. Everyone's idea of what England is like. It's a shame it's not quite this pretty everywhere, but there are fortunately plenty of heart-stopping sights like these. No wonder it won the prize!