The worst locks and then the Herbie Premier Award intro

Don’t sit too close to your screen, you might catch my cold. We’re all sniffling and coughing here. Never mind, The Show Must Go On and we need to announce the Winner of the Herbie Special Award, which I seem to have been calling the premier award lately for no particular reason.  Anyway it has to go to someone who has done something admirable. More of which later.

First let’s clear up the outstanding issue of the worst locks we have passed through this year.  We can’t say we weren’t warned about these locks. They are difficult and, to my mind, dangerous, and they lived up, or should I say down, to their reputation.  I’m sure the locals are used to them and don’t give them a second thought, but I would surely change them if I had the power.  The lock landings are often inconveniently placed, the outflow from the emptying locks are scary when you are waiting below, the lock gates are not nice to walk over, the locks themselves are very deep to allow for river levels so roping up is not easy, and worst of all the currents in the lock when filling are scary.  And of course the gates are heavy. Otherwise they’re fine.  These locks come in two groups, one of which is a fair bit better than the other.  I have no photos of the bad ones, because I was too busy surviving to take pictures, so here is one of the “good ones” filling as gently as we could manage. 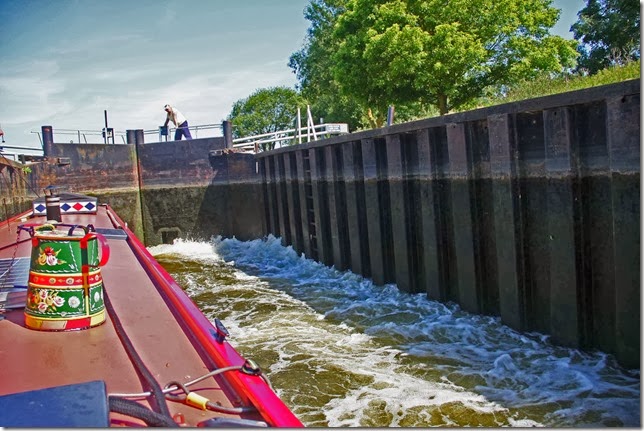 No doubt the cognoscenti will by now have worked out that these locks are on the otherwise lovely Lower Avon (the Tewkesbury to Evesham Stretch).  We experienced them at their most benign, with low river levels.  Goodness knows what they are like in high water conditions.  The nicest thing I can say about them is that they are often in delightful surroundings.  Sorry Avon, I love you dearly but you need some nicer locks.

Well, that’s that.  Now it’s Christmas Eve Eve, so tomorrow we will announce the winner of the Herbie Special Award.  The winner of this will be someone we all have to admire.  The original Special Awards were given to people who had been personal friends and helpers board Herbie, culminating in the fabulous group win in 2010 for the gnag who have selflessly toiled over the big Herbie repaint (still looking good).

Then as an additional Award in 2010 we created a new category to honour people not necessarily associated with Herbie, but who had done something admirable in a boating context. The first of these was an Award for Fortitude to Sue and Vic on No Problem as representatives of all those hardy live aboard folk who had put up with weeks of ice and snowbound isolation far from water supplies and loo emptying. Then in 2011 we decided to bestow the award upon the wonderful Sue and Richard on Indigo Dream for their unbounded generosity in taking other boaters on wonderful cruises down the Thames tideway. Then last year it went to Maffi for his selfless efforts to tidy up the canal bank wherever he went.  So whoever wins this year is in elevated company.
The golden envelope is sealed and awaiting Kath to put on her glamorous frock to make the announcement. Charge your glasses for the toast and tune in tomorrow to join in the rapturous applause.
Posted by Neil Corbett at 12:03 pm

Can't wait, Neil :) If I don't make it to the ceremony, have a wonderful Christmas and New Year. Hope you don't get blown away. The storm winds here have done a lot of damage, so I hope it's a peaceful day tomorrow.